Are Web3 Apps Positioned As The Next Generation Of Technology? 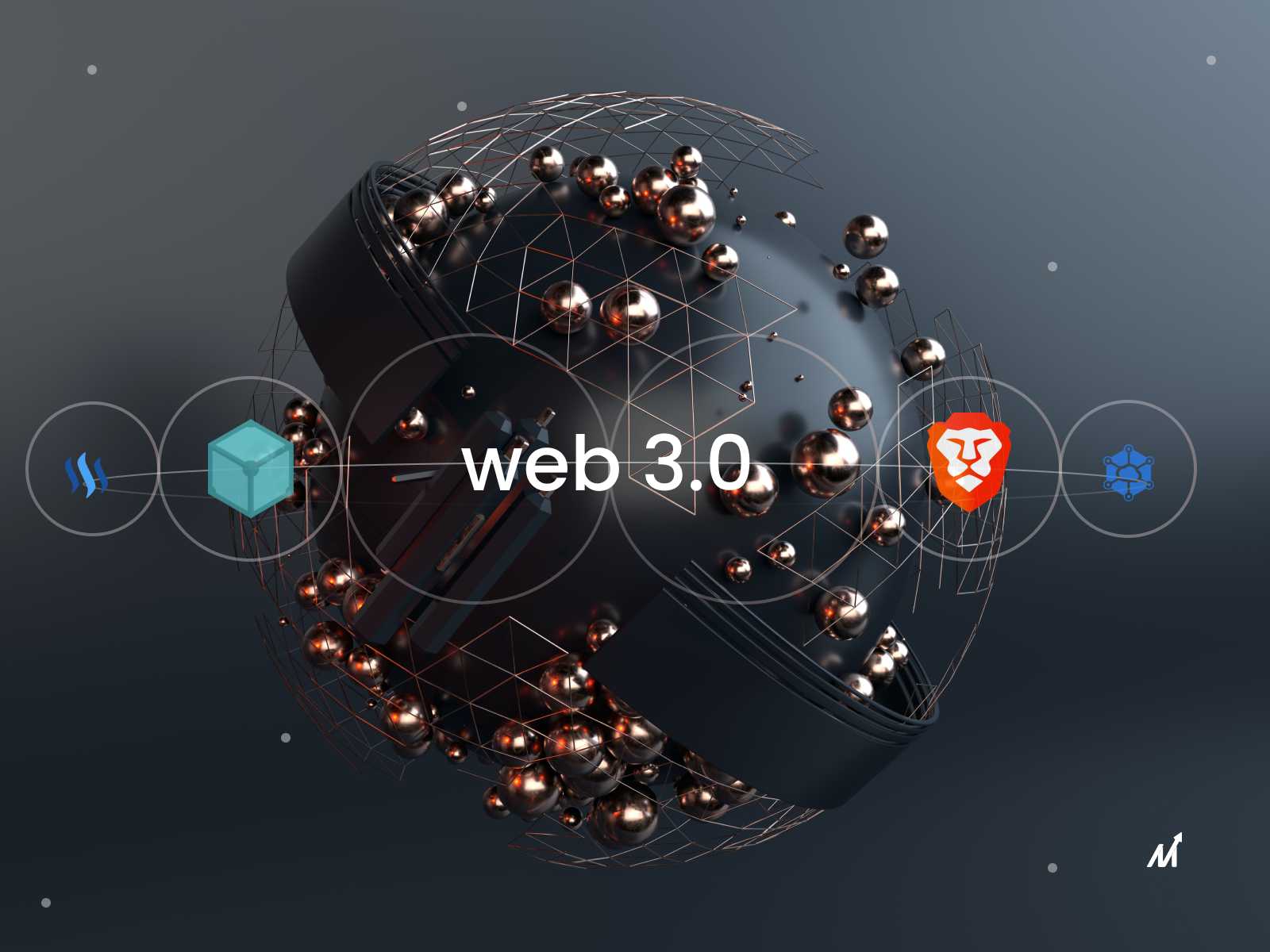 Technology is continuously evolving, and innovations are being made daily. People are looking for the next big thing to help overcome earlier shortcomings. Web 3.0 is one such model which has developed over the years and aims at providing a decentralized virtual space that everybody can use. This has also made Web3 apps the next big thing in the world of applications.

It helps solve the problems of the present online ecosystem and exploits the power of the latest technologies, such as Blockchain, AI, and ML, to develop a new model. Web3 apps have provided a new dimension to what we know as the Internet and enhanced its functioning power multifold. It believes in putting the user’s needs over everything else, be it in terms of privacy, governance, or services.

Web3 apps, based on blockchains and decentralized peer-to-peer networks, are a part of the next boom in the industry. Industries such as healthcare, finance, and social networking have adopted these vastly. They believe in providing a solution to the users independent of any central power, completely transparent, and highly customizable, shifting all the control into the user’s hands.

Web3 Apps: Next Generation Of Technology

The staggering growth rate itself is proof of the scope in this domain. Researchers, entrepreneurs, and even students are exploring the Web 3.0 era and trying to exploit its potential to create the following product which would be different from the standard apps we use nowadays.

The tech giant, Facebook, has changed its name to Meta and decided to invest billions of dollars in this domain due to its promise of building next-gen applications based on Metaverse.

Evolution Of Web1 To Web2 To Web3 Apps

The Web came into existence in 1989 and has evolved immensely since then. Earlier, it was defined as a set of hyperlinked documents containing text and some images that anyone with an internet connection could access. We are currently in a phase where it is attempting to integrate intelligence that would improve automation, mobility, and globalization. 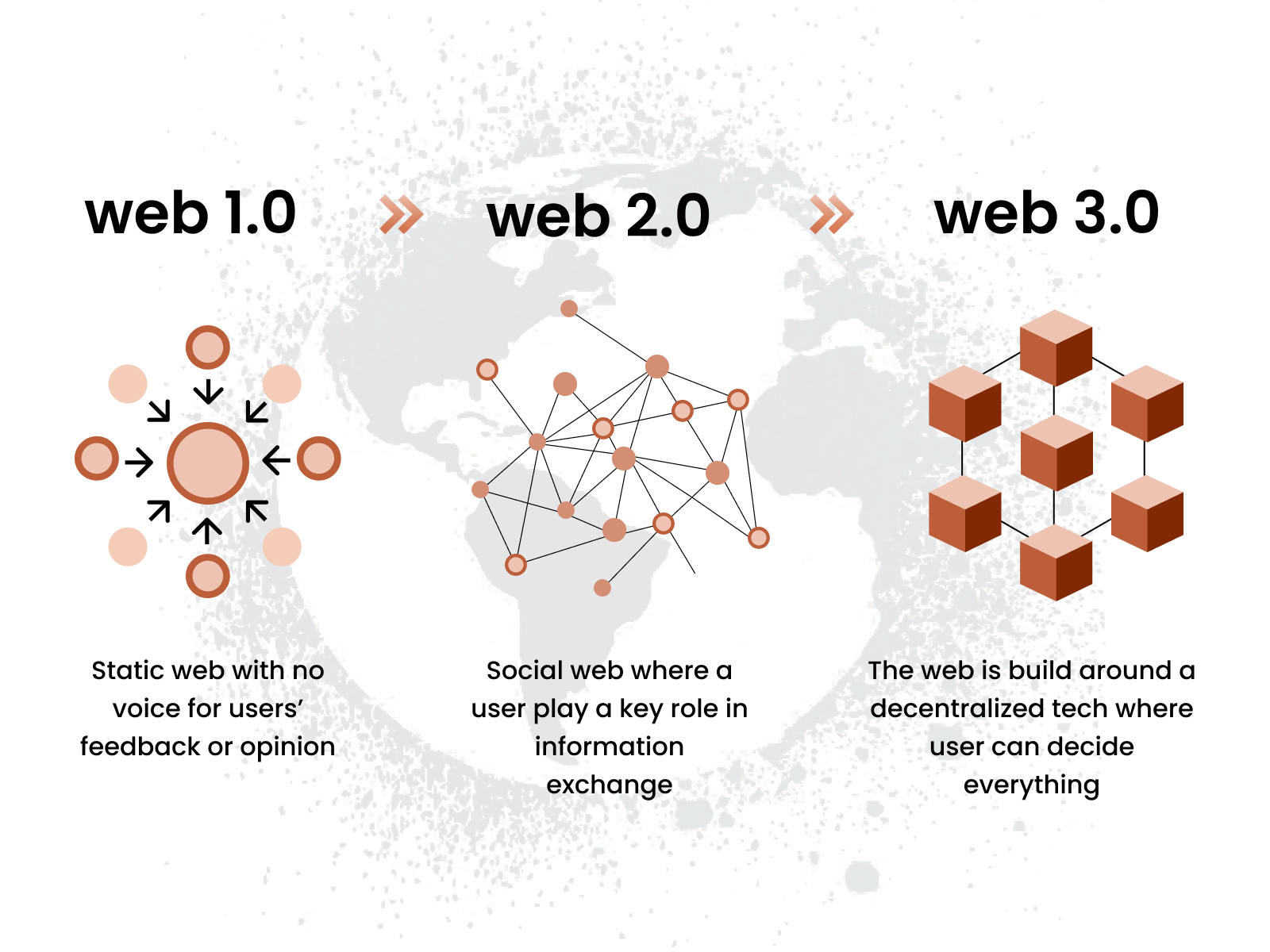 From 1989-2005, people viewed the Web as ‘read-only.’ This meant that users could only see the websites uploaded on the Web, which were essential and primarily used to spread information. Static HTML pages, using browsers like Netscape and Explorer, linked with each other through links and metadata. This generation of the Web focused on content delivery, and dynamic interaction was negligible. The primary purpose, which was to allow users to access data from all over the world instead of interacting with it, was fulfilled through this type of Web and showed that there was hope in the future for a new era of digital communication that would be built upon this model.

After thoroughly exploring Web 1.0 and its capabilities, in 2005, Web 2.0 emerged. This model focused on the communication between the users and the Web and developed new ways of making dynamic interaction possible. It believed in principles such as the information is what moves the Internet and that the different characteristics of a network can be developed independently. Users could now consume content and create them, resulting in more active participation from people worldwide. Sites like blogging and social networks using technologies like Javascript and .NET framework were used as well as deployed using strict Internet protocols. Web 2.0 enabled fruitful collaboration and quality content generation, along with creating dynamic web applications which put the end-users contribution to the Web as its prime target.

The current era in which we live is on this Web model. Web 3.0 is the ‘read-write-executable’ Web, which aims to make connections more intelligent and open, giving the user the power to be a content owner rather than just a mere user. It is based on a decentralized and permissionless model, which gives users the authority to use the Internet in whichever way they want while not compromising their privacy. Web 3.0 is yet to be figured out completely, and the coming years seem promising for this Web ecosystem.

There are multiple reasons why Web 3.0 is the next big revolution. The ability to empower the Web in such a way that it can automate its decisions or create a network of virtual environments that blurs the line between visual and actual reality. Also, Web 3.0 gives the sole digital ownership to the user, removing any scope for any centralized power. This also greatly increases overall security and reduces the risk of fraud. It is necessary to know about Web 3.0 and the technologies involved, such as Blockchain and Artificial intelligence, as many companies have also started innovation. To survive in the market, you must be able to create a user-defined product based on these. 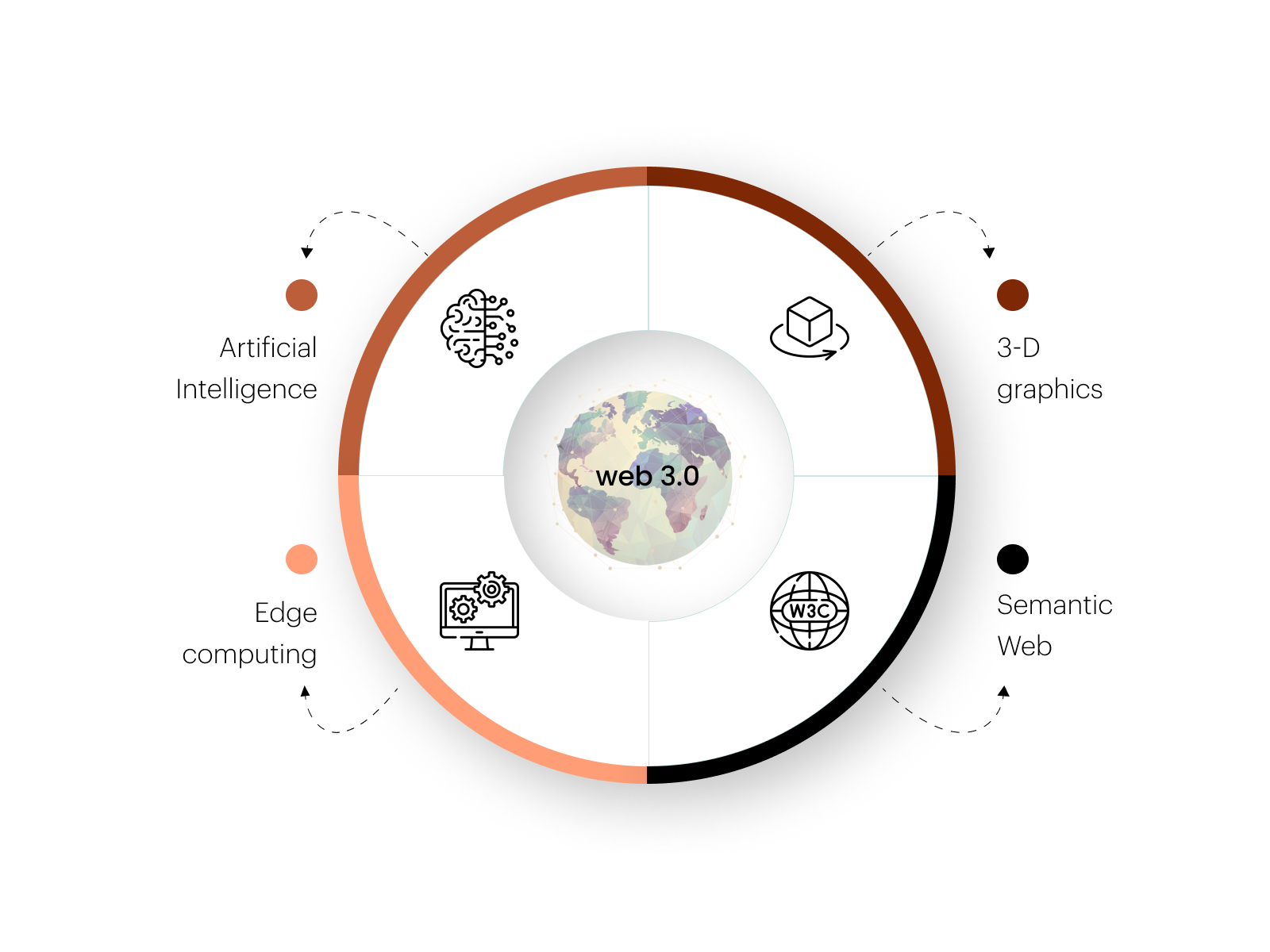 Some features of Web3 apps are:

Edge computing enables data processing closer to the source of the data, such as laptops, smartphones, smart automobiles, and IoT devices.

Artificial Intelligence aims to equip the Web to create smart browsers that can understand human needs better through various algorithms, providing more accurate results. It provides a highly personised experience to the user, be it in search results or ad recommendations, and enhances the user-web interaction.

The semantic Web is the next evolution in the field of the Web and focuses on enabling it to interpret data in the user’s context rather than just in terms of numbers and text. Tim Berners Lee defines it as “a web of data that can be processed directly and indirectly by machines.”

Some Success Stories Of Web3 Apps

Wolfram Alpha has recently gained immense popularity as a search engine based on computational intelligence. It can calculate and gather all the information related to a search query, rather than just providing a list of articles, provides the user with more than sufficient information, and gives a fantastic user experience. 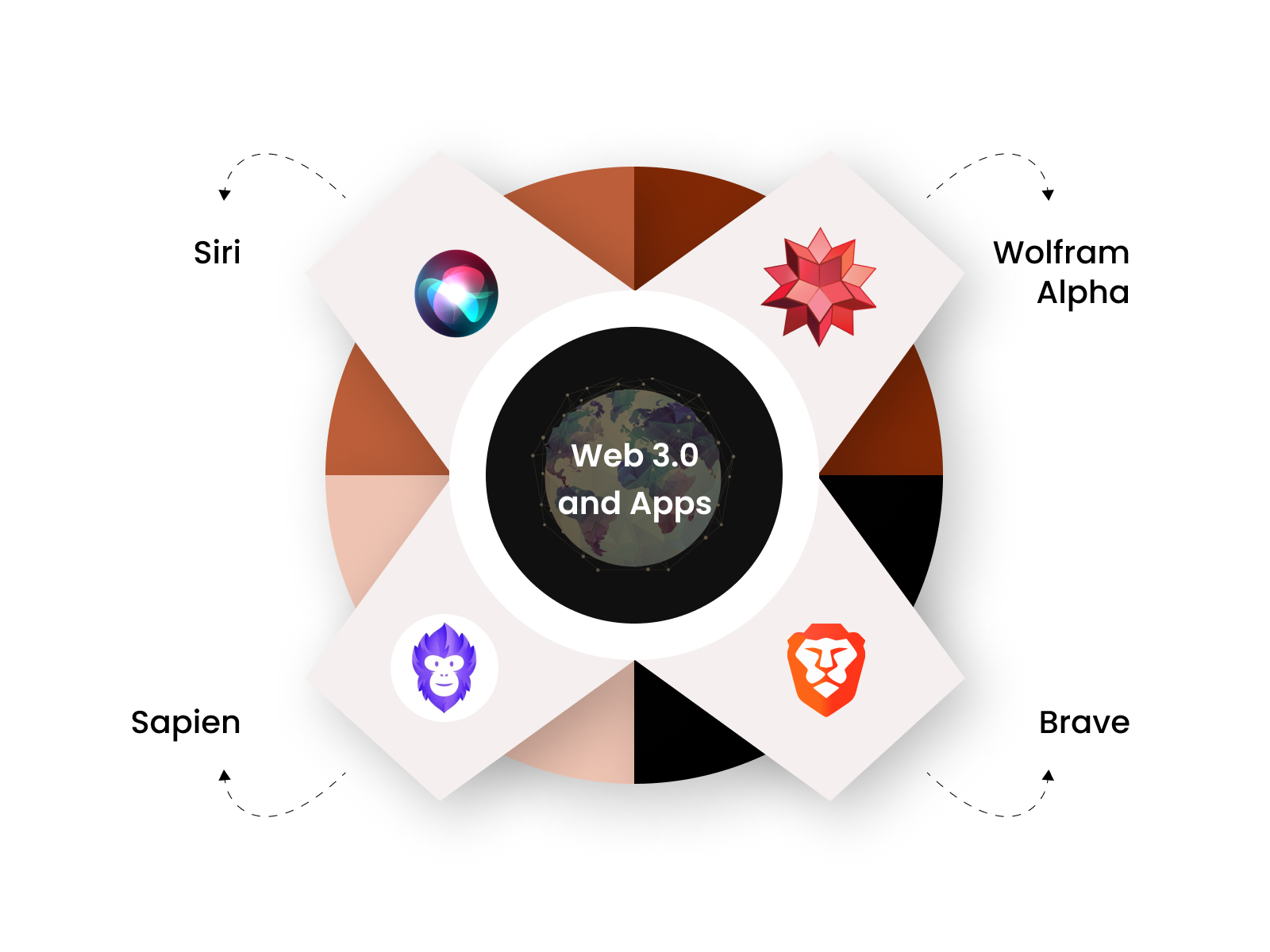 This social network website powered by Ethereum is one-of-a-kind and allows to create as well as deploy a set of apps, tools, and technologies of which they can get sole ownership. Sapien provides a highly customizable platform that rewards content generation and minimizes fake news.

The Brave Browser, developed by the Mozilla Foundation, focuses on providing users with a faster, more reliable, and more secure browser that prioritizes the user’s and their needs first. It is open-source, uses blockchain technology to block spam, ads, and trackers, and allows customers to sell their data in exchange for cryptocurrency.

The Web3 revolution in the next few years will completely transform how we interact with the Web and unlock new possibilities that were impossible earlier. Thus, it’s important to start exploring this field and look for products that can create a secure place in the market in the future.

Markovate, as a Web3 app development company, can help you create Web3 apps with the help of the latest cutting-edge technologies to provide you a unique edge over others and give your app a new dimension in terms of functionality. We aim to create secure, reliable, as well as scalable apps that provide the user with the best experience possible and integrate all the elements that can help you fulfill your business potential.

Further Read: Web2 vs Web3: What’s The Difference & Why Does It Matter For Your Enterprise?

Web 3.0 is not the same as Blockchain. One of the numerous applications of blockchain is Web 3.0, a distributed, immutable, as well as decentralized ledger.

2. Does Web 3.0 provide a richer experience?

Web 3.0 provides a richer experience than its earlier versions due to the integration of AI/ML algorithms, rich 3-D graphics, and technologies such as Blockchain. This gives its users a secure, interactive, as well as fruitful experience.

3. What are examples of Web 3.0 applications?

Examples of Web 3.0 applications are Brave, Storj, Sapien, and Livepeer.