Web2 vs Web3: What’s The Difference & Why Does It Matter For Your Enterprise? 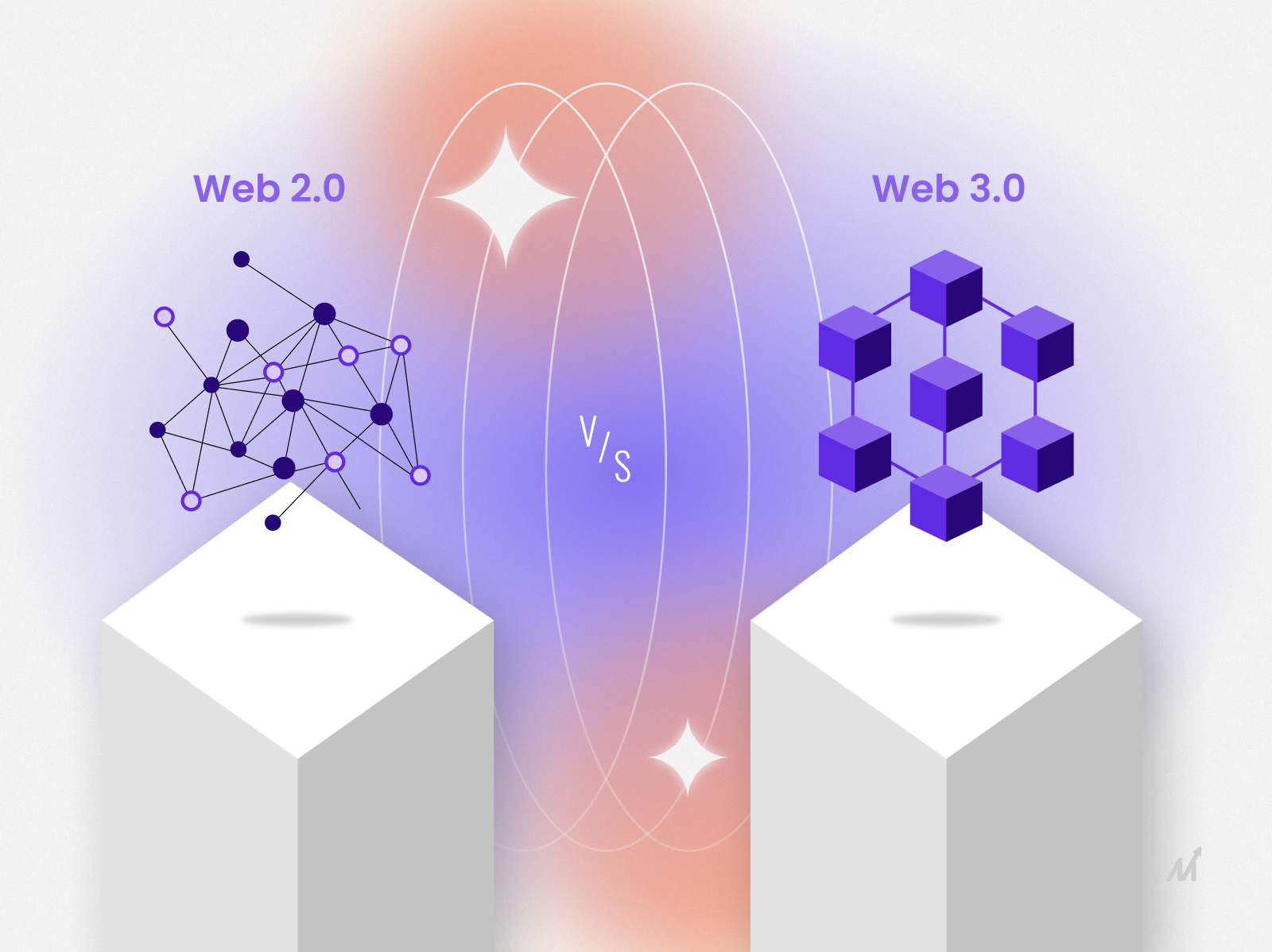 Web3 is gaining traction in the internet world. Its growing popularity is proportional to the widespread acceptance and usage of blockchain and security technologies. The fact that Web3 will become the standard sooner or later gives us an opportunity to examine past generations, their differences, and so forth.

Web2 caters to today’s internet generation, whereas Web3 is the semantic web. From the early days of Web 1, which comprised static text and images, to the present iteration – Web2, the Internet has advanced swiftly. We are approaching the Web3 age, in which value and data will be effortlessly transferred across decentralized platforms with dispersed ownership and governance.

As per the statistics, amongst the Web3 apps, 46% of the apps are in the finance sector, 8.9% belong to the social sector, and the rest belong to the games, business, and various sectors.

Let’s learn more about the evolution of the Internet, from the primary web to a semantic world, the distinctions between Web2 vs Web3, related ideas, how they differ, and which will rule supreme in the next decade.

Web2 vs Web3: Exploring The Differences Through Statistics

While Web2 attempts to connect individuals, Web3 integrates this data in terms of meaning while also improving trust. This occurs as a result of decentralization. More distinctions are given below:

Fiat money is used for Web2 currency payments. Transactions are conducted using government-issued money, such as the US dollar. Web3 uses cryptocurrencies like Bitcoin and Ethereum to fund transactions as an alternative.

With Web 2.0, the network takes over information storage, generating access challenges and worries about the anonymity and security of online data. Web 3.0 addresses this issue by transferring data to several locations simultaneously. 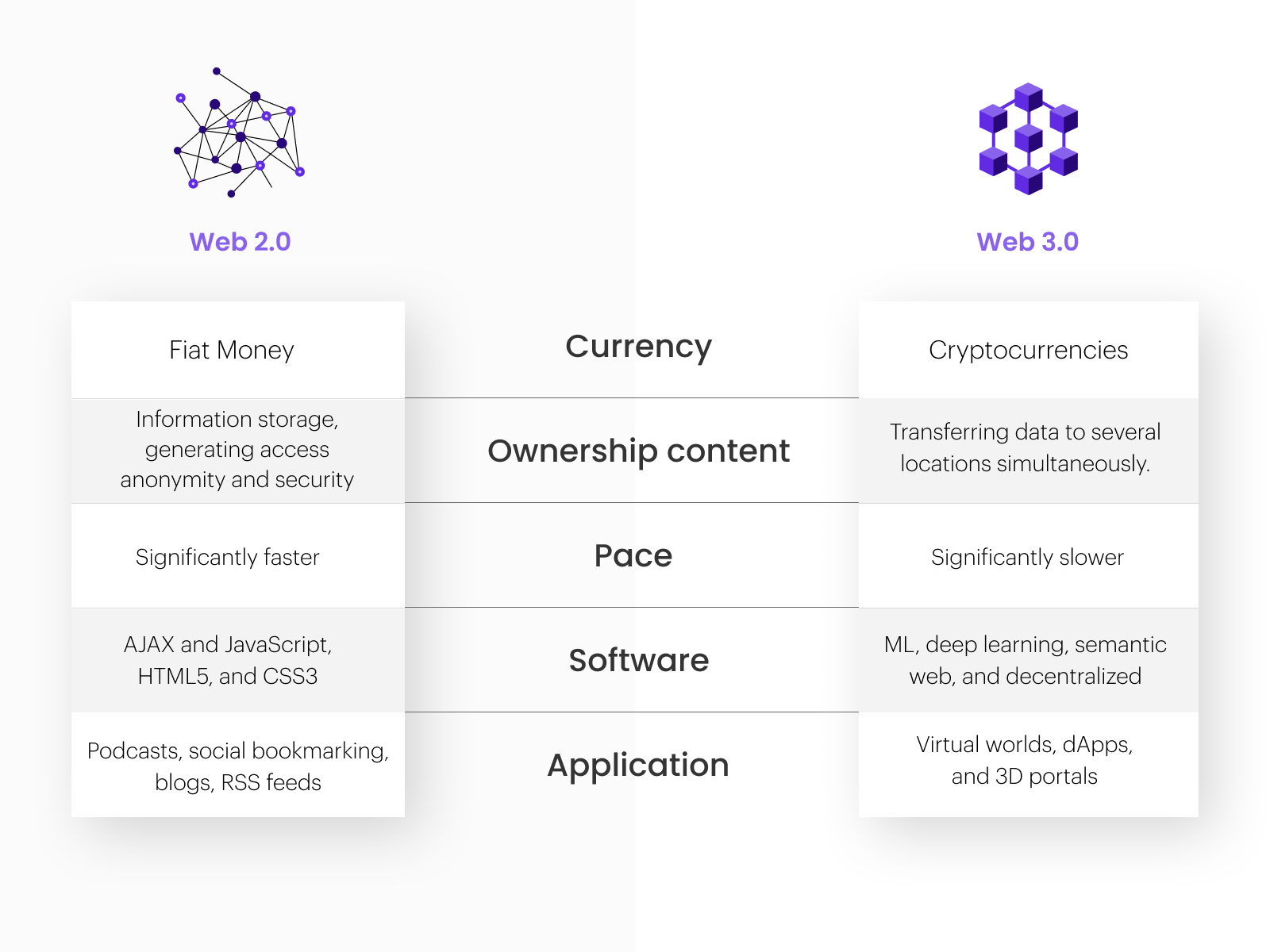 Web2 transfers are significantly faster than Web3 transfers. Web2 uses HTTP in unique web addresses to search for information stored in a fixed location, often on a single server. Web3, on the other hand, distributes ownership to a slew of other people (decentralization).

Web2 vs Web3: Why Choosing The Better Options Matters For Your Business?

The influence of Web 3.0 on the company will be openness and user/customer orientation. As a result, the way firms use their customers’ data will alter. Because blockchain is at the heart of Online 3.0, all web apps must be blockchain-enabled to participate.

Businesses can benefit from Web 3.0 in the following ways:

Web2 vs Web3 is a variant of the age-old centralized versus decentralized argument. Because Web3 has yet to appear, its supposed superiority to Web2 is debatable. However, with its decentralized architecture, Web3 has the opportunity to address the data-related problems that have plagued Web2 and return control to consumers.

Web2 is a well-known internet version. It is dominated by firms that provide services in return for personal data. Web2 will not be phased out anytime soon due to these constraints. The most likely scenario is that Web2 and Web3 will coexist, and we can access either network. This indicates that organizations will not completely pivot to Web3 but will instead begin developing d-app products for Web3.

Web3, on the other hand, refers to decentralized apps that operate on the blockchain. Such apps enable everyone to engage without having to monetize their data.

After reading this article about Web2 vs Web3, we believe you will have answers to all of your pertinent questions. You can contact us for further information; we would be delighted to assist you.

Further Read: Web3 vs Metaverse: Everything You Need To Know

2. Is Web3 the future of the Internet?

Web3 is the Internet’s next version – a digital environment we may enter utilizing Virtual Reality (VR) or Augmented Reality (AR) technologies. It is now even feasible to purchase real estate in the virtual world. This paradigm will be broken by Web 3.0, which will shift from a single server to many separate, decentralized servers. Web3 is the most recent internet version. That sounds significant, and it is, but the Internet is not being removed and replaced. Instead, it is about supplementing what we already have.

Misconceptions Regarding Web3 → A key misunderstanding: metaverse and Web 3.0 are interchangeable. The metaverse consists of people engaging with the presentation/interactive layer, whereas Web 3.0 is the complete architecture, with each level decentralized.