Flutter vs Native: Which One Is Better For Your Upcoming Project?

We’ve grown accustomed to accessing everything from our hands as our lives have become increasingly entwined with technology. Whether for our finances, employment, education, information, gaming, or shopping, we first go for our phones. Throughout this article, we explained the differences between Flutter vs native app development from different angles.

It’s no surprise that mobile apps are in high demand, and mobile development teams are under pressure to provide excellent products as soon as possible. The problem with developing for iOS and Android is that it is time-consuming. Flutter offers a solution for this.

A Flutter is a UI software development kit primarily used for producing applications for Android and iOS. It is the technology of choice for the quickest time to market. Despite the fact that Flutter is still relatively new, it already has over 150,000 applications. Its usage has nearly doubled, according to Statista surveys, rising from 23% in 2019 to 42% in 2022.

Developing a mobile app with native technology implies using technology and techniques specific to a single platform. Flutter is based on “write once, run anywhere.” That means you simply have to write one set of code and deliver it on every platform you desire (Android, iOS, Linux, etc.).

Flutter’s most significant advantage is its ease of development. At the same time, it performs similarly to native apps, and the apps look the same across platforms.

What exactly are Native technologies?

Native application development creates an app specific to iOS, Android, or Windows, allowing it to fully utilize device features like the camera, accelerometer, compass, GPS, etc. App stores such as Google Play for Android and the App Store for iOS install native apps. Frameworks and programming languages that are widely used include:

What exactly is Flutter?

Flutter is a Google Dart-based open-source framework. As a UI toolkit, it allows developers to create cross-platform apps from a single codebase. On native hardware, it provides for creating expressive and flexible user interfaces. A team of Google developers, as well as the broader flutter community, support and contribute to the project.

Want to learn more about Flutter app development? Read this: The Only Flutter App Development Guide You’ll Ever Need 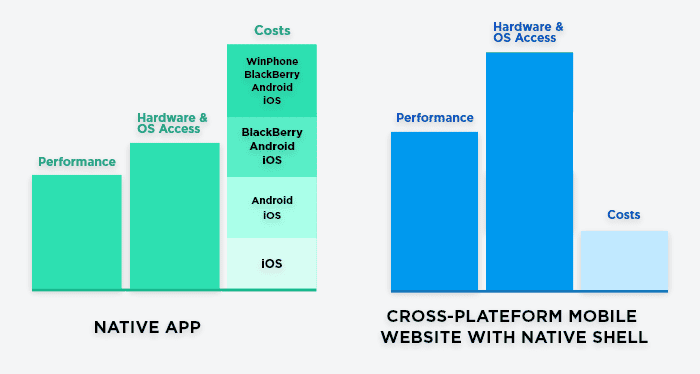 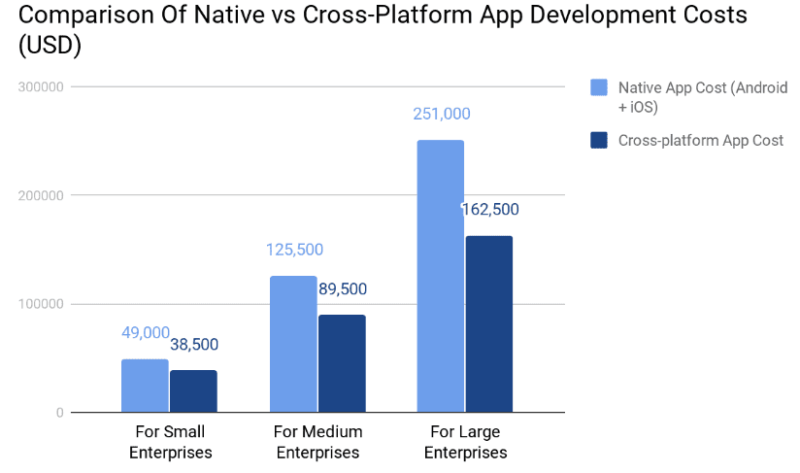 Consider these points before choosing Flutter or the Native app

All things considered, the Flutter framework would be an excellent alternative for app development for firms looking to create a native-like app. Although cross-platform frameworks frequently appear on the market, native applications remain the industry’s favorite. Flutter is an excellent choice for enterprises that want to build a mobile application.

In a lifetime, many frameworks will come and go. Flutter has already made a name for itself in mobile app development. In cross-platform app development, its growth rate has eclipsed its nearest competition, the React-Native framework. Does this imply that Flutter technology will mostly replace native app development? Sounds plausible. Native development in Java/Kotlin/Swift will undoubtedly continue, but you should anticipate app migration and possibly significant market adjustments.

Furthermore, Flutter has already established itself as the best user interface design framework currently accessible. It has various unique design tools and widgets that aren’t available in native Android app development. And thanks to Google’s extensive documentation and simple command-line interface, Flutter makes the setup process much more manageable.

These features tell analysts that Flutter has a vast potential to displace Java in the mobile app development space. In 2022 and beyond, don’t miss the chance to develop cross-platform apps with Flutter.

There will be a struggle between native and cross-platform software for many years to come. In the future, we will need a cross-platform solution with native app development capabilities. As a result, the two are in a heated fight.

The industry will continue to grow and look for holes to fill to create a perfect blend of both platforms that can meet the demand while integrating the advantages of both platforms with efficiency and effectiveness.

Cross-platform skills in development will build a solid basis for future advances with ongoing efforts and substantial modifications.

1. Is Flutter better than native?

“Write once, run anywhere” is the foundation of Flutter. That implies that all you need to do is build a single set of code and provide it across all platforms (Android, iOS, Linux, etc.). The simplicity of development is Flutter’s main benefit.

The leading players are all owned by Big Tech, as can be shown by looking at the most popular mobile apps in the Apple and Android app stores. How can a startup or even an organization expect to succeed in light of this? Is the creation of mobile apps going extinct in 2022?  No, in a nutshell.

3. Is Flutter faster than React Native?