Xamarin For Enterprise App Development: Why Is It Getting Popular?

Apps have revolutionized working in today’s times, with almost every service available just a click away. Maybe the easy access or the overall convenient and interactive user experience makes apps a popular choice for millions of consumers out there. Mobile apps especially have become indispensable for people from almost every background and society, who use them to fulfill their varied needs. It helps them stay in touch with the outside world and take advantage of resources that might not have been available quickly, say, a few years ago.

Thus, for every business developer, entrepreneur, or executive out there, understanding this market has become crucial to recognizing what the customers are truly looking for and building a sustainable market for their products.

Thus, for every business developer, entrepreneur, or executive out there, understanding this market has become crucial to recognizing what the customers are truly looking for and building a sustainable market for their products.

There are many platforms out there for developing cross-platform apps, such as Nativescript and Flutter. These can be used to create multi-platform applications, make their codebase available to a broader range of audiences, and allow their applications to run on anything, be it iOS, Android, or Windows.

Another pioneering tool in the domain of cross-app development has been created by the software company Xamarin. Xamarin, founded in 2011 and acquired by Microsoft in 2016, is an open-source platform that provides development tools to build and test native apps. It is regarded as one of the oldest players in this field, and its ease of use and multi-purpose features have made it a favorite of millions of developers.

The popularity of Xamarin for enterprise app development: Let the numbers speak

As an enterprise owner, one must focus on speed and scalability to help the user feel a sense of ease and power while using the app. Xamarin helps them achieve these targets with its varied range of services which helps them build, test and deploy their apps and use them to debug and get constructive feedback to improve the app’s performance.

Xamarin for enterprise app development has thus recently emerged as a popular choice amongst businesses and developers, as the statistics shown below will portray:

Over 1.4 million developers were using Xamarin’s products in 120 countries around the world as of April 2017.

This shows that even though it is one of the oldest frameworks in the market, it still has gathered a lot of attention from people worldwide to help create user-friendly apps. Also, the code-sharing is up to 90%, along with the ease of using a single tech stack unlike other platforms, which might also be why developers prefer it.

Companies and start-ups like Olo, Zappitti, Alaska Airlines, and the World Bank use Xamarin for providing their services due to its capacity to build and sustain heavy-scale apps. All these companies work in a wide range of fields, from finance to energy to healthcare.

This open-source framework has more than 60,000 contributors that come from 37,000 different companies.

Since it’s open source, developers from all over the world contribute to its codebase making it more error-free and resulting in higher quality. It also increases reliability since the whole code is available for anyone to see and make changes to.

It has a 6.5% market share in the business category, with over 13,000 apps and over 2 billion downloads.

For enterprise app development, statistically, it’s one of the most in-demand choices. It provides several advantages over competing platforms, particularly cross-platform or hybrid development techniques.

1. Reduces the time for the product development life cycle

Since the code shareability in Xamarin is about 90%, it significantly reduces the time between product development and product deployment, as the code is common across multiple platforms. Thus it can be written, compiled, or debugged from a single place without any need for translation. This saves a lot of time and resources.

Xamarin for enterprise app development allows easier integration of APIs and user interfaces, increasing the app’s functionality. It is extremely flexible and allows development in platform-specific languages such as Swift and Java. This makes it available on various operating systems.

Developers can effectively use it for prototyping and testing their designs since they have cross-platform UI toolkits to check the interface on all devices. This makes their job easier as they do not have to go on separate platforms and run the code repeatedly to analyze their prototypes

Xamarin helps to reduce the time for maintenance, which helps to solve the user’s problems quickly. Only changes in the source file need to be made and reflected on other apps on the various platforms.

Reasons why you should switch to Xamarin

1. Use of a single tech stack

You are good to go if you know C# and have Visual Studio. Xamarin has the power to create multiple apps using a single language and use it on various platforms. Imagine the amount of time and effort it saves!

If you’re worried about creating testing apps on Windows and iOS separately, Xamarin has covered you. It has hardware-specific APIs which allow you to develop a native app fully. Any UI design/code can be applied natively to the app.

Reasons why you should not switch to Xamarin

Xamarin might not be the best choice for gaming apps requiring good pixel quality. It does not support the integration of graphics and animation and can’t work on advanced and heavy UI’s

The updates usually take time, and thus the app might lag 1-3 days. It also might slow down the developers since they can’t work unless it’s fully integrated.
The app size is also slightly larger by around 25-30 megabytes, as they have the added advantage of shared functionality which native apps do not. This makes them slightly heavier.

It can be written on various operating systems such as: 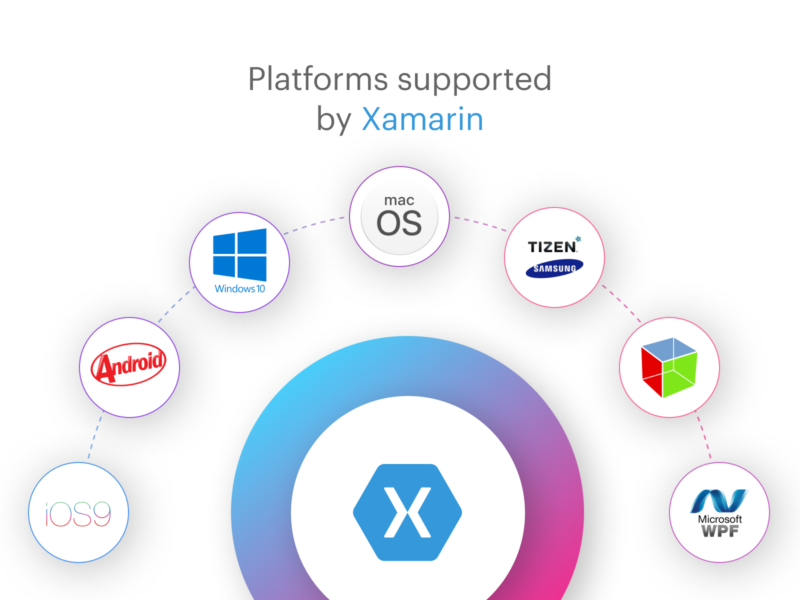 As a Xamarin app development company, the Markovate team has used and felt the power of Xamarin firsthand. Be it flexibly developing large-scale enterprise applications, lower cost, and higher operational efficiency, or integrating it with services such as Cloud, IoT, and Diagnostics for increasing scalability, Xamarin is a one-stop solution for everything.

A single code written in C# can be used across native platforms like iOS, Windows, and Android with the added benefit of using native API integration and UI kits, which offers almost no barrier to the performance and development of the app. It also enables the developers to deliver their products at a highly reduced time and makes them faster too!

It’s thus clear then that Xamarin is an excellent choice for enterprises looking for robust and strong apps with smooth functionality across any platform. Continuous updates and checks by Microsoft have also maintained the quality significantly, and the regular contribution of the open-source developers is only taking this platform to greater heights!

1. Is Xamarin good for app development?

It is extremely powerful in making cross-platform native apps with a wide variety of features and code reusability, making it a great choice for app development. It is especially useful for developing enterprise apps and fulfilling their requirements.

2. Is Xamarin better than Android studio?

Both have their pros and cons. Xamarin is better regarding development time and cost, along with features like code reusability and shareability.

3. What apps are built with Xamarin?

There are thousands of apps in various fields made using Xamarin. Some famous ones are given below:

C# provides added advantages over languages like Objective-C and Java, such as parallel programming, dynamic programming, and functional constructs, and also has a faster compiling time than most languages.