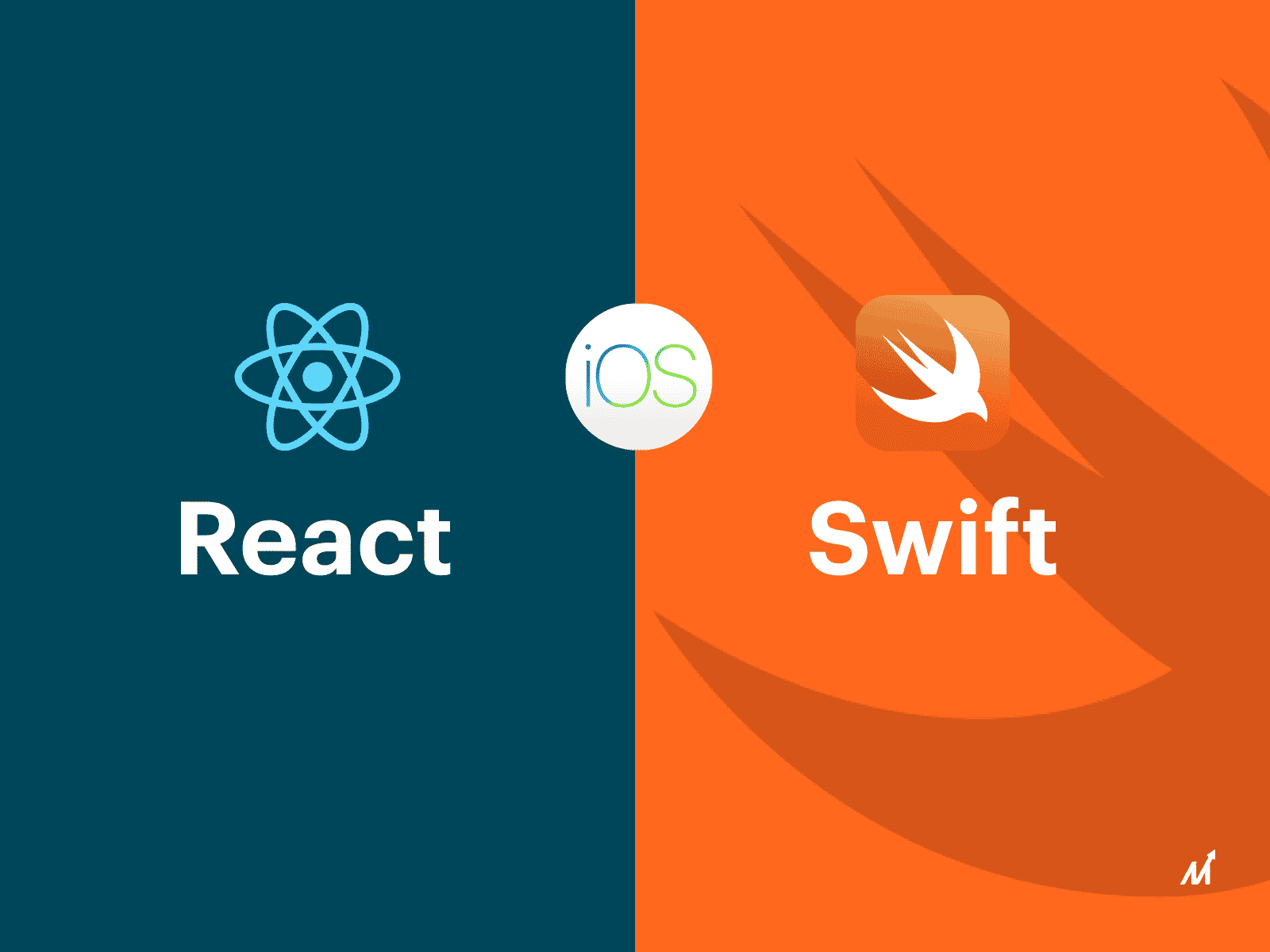 Are you considering developing a cross-platform or native iOS app for your business? How do you pick the appropriate technologies to give your app a unique look and feel?

You might believe that selecting a technology stack for an iOS app is simple. However, developing native apps isn’t always the best option. What if you need a cross-platform solution for your project? What if React Native is more cost-effective than Swift? Is it possible to build native iOS apps using both React Native and Swift? Let’s compare these two approaches to iOS app development services.

In the case of an iOS application with a simple user interface and no complicated logic, React Native is a perfect choice. Above all, try this framework if you need to get into the market quickly and save money on development.

If your app is complex, needs to benefit from all of the device’s features, and needs to work with all Apple products, Swift is the way to go. Also, if your budget isn’t too tight, go for Swift.

Let’s dive into the comparison pool to see what we can learn about these technologies.

The iPhone is unquestionably more than a product; it is a social and cultural phenomenon that sparked the smartphone revolution in June 2007 when it was initially released. Since then, the device’s popularity has soared, with the brand accounting for 15.2% of global smartphone unit sales. Even more astonishing when you consider that Apple is a premium brand, and these figures include cheap or no-name brands sold in rapidly growing economies.

iOS-powered smartphones are most popular in the world’s strongest economies, including the United States, Canada, Scandinavia, and Australia.

Given that, it’s no surprise that Apple is powerful enough to impose its frameworks and programming languages – which Swift is.

What Exactly Is Swift?

Swift is an Apple-developed general-purpose programming language that was initially released in 2014. It is used to create programs for macOS, tvOS, watchOS, and other platforms because it is a multi-paradigm programming language. Swift is also more versatile, trustworthy, expressive, and efficient because of the revolutionary software design.

The language is simple to create, read, and maintain and has a human-friendly syntax. Swift also includes the Cocoa and Cocoa Touch frameworks from Apple.

Swift has been used to create some well-known apps. We have compiled a list of the finest applications for improved comprehension.

Swift’s interoperability features have been used extensively in this travel agency app.

Swift was implemented in the iOS version of this social networking platform and has since provided a seamless and speedy user experience.

Swift has made this cab booking app lighter, smaller, responsive, and easier to maintain.

What Exactly Is React Native?

React Native is a framework for creating device-independent mobile apps based on JavaScript. The open-source framework is developed in JSX, a JavaScript and XML-like markup blend. The Facebook-backed React Native framework allows developers to share many scripts between apps. As a result, the overall cross-platform software development time is significantly reduced.

This is why more than half of the app development community prefers to use React Native.

Every business wants to know why they should hire a React Native developer. To give you an idea, here’s a list of companies that have gained significant benefits from developing Android and iOS apps with React Native.

This social media platform used React Native to implement WebView-based push notifications. It achieved so without putting together a navigation system.

The user experience has been improved, and in-app animations have been optimized to match the native functionalities.

Here are some incredible stats for the market usage of Swift:

Swift vs React Native: A Comparison

While React Native may produce a decent native-like UI, it lacks Swift’s level of stability. You may take advantage of the device’s features and create a more stable and feature-rich app by using the native development language.

Swift gets the advantage here, too, because native development nearly consistently outperforms cross-platform development. Swift is well ahead of the competition, especially in dynamic and graphic effects-rich apps.

Even though it’s difficult to compare the two because React Native is a framework and Swift is a language, it’s clear that React Native has a far larger community. On the other hand, Swift has shown to be quite popular and helpful in the mobile app development industry and has been rising in popularity over time. 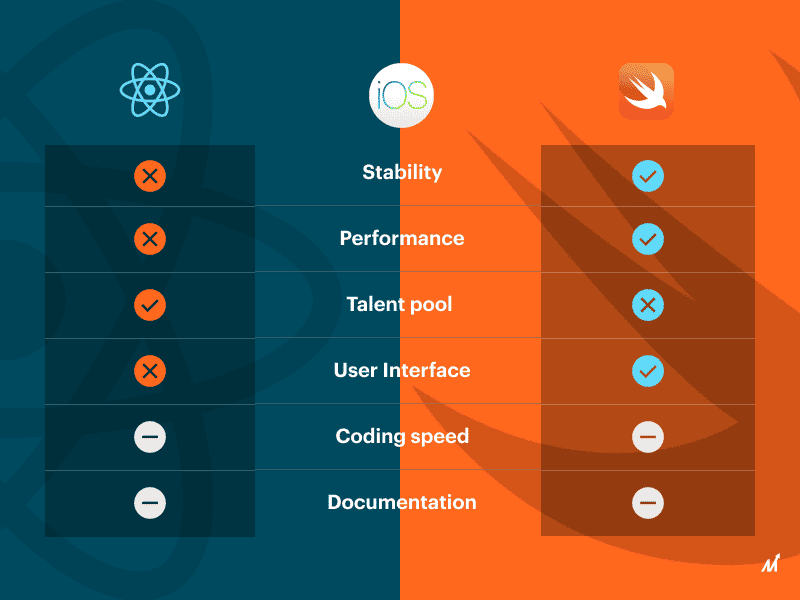 React Native uses native components and APIs to allow an app developer to create native-like applications with a similar appearance and feel. Swift was created specifically for iOS programming, ensuring that the UI elements on iOS devices are of the highest quality.

Your objectives mainly determine your coding pace. If you’re solely making an iOS app, Swift is undoubtedly the best option. React Native, on the other hand, will ensure faster results if you want to launch your solution on both iOS and Android.

React Native and Swift has good documentation, given they were built by well-known and experienced tech heavyweights like Facebook and Apple.

Let’s look at the benefits and drawbacks of using React Native. 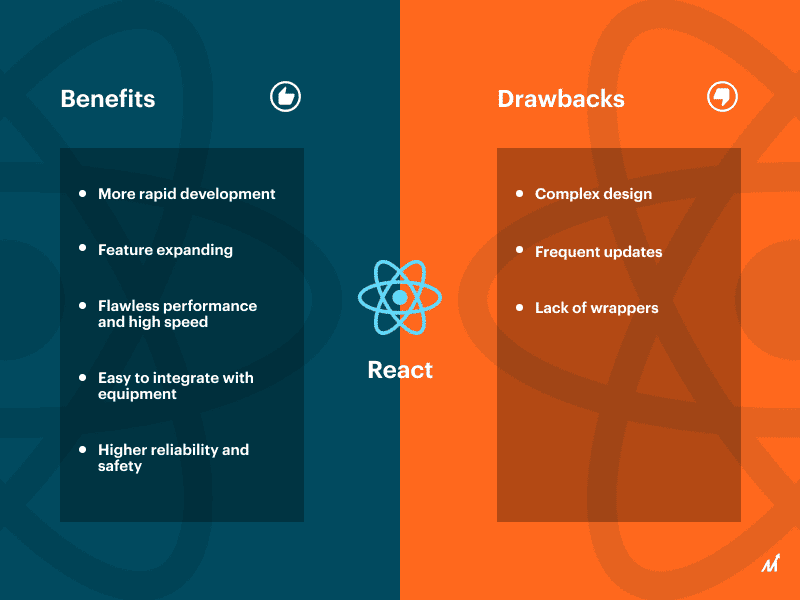 Native app development may offer a superior user experience. They usually provide excellent results. The UX is also improved because the images are tailored to the platform’s UX design.

Furthermore, among the React Native vs Swift advantages are the following:

JavaScript is integrated into React Native. Approximately 90% of the code for your mobile application may be found in online applications. React Native takes 1 to 5 months to build an iOS native app, which is 33 percent faster than Swift.

You can enhance the functionality of your app by using pre-existing or new JavaScript modules.

Because they are created for a particular operating system, a native application takes full advantage of the device’s processing speed. The apps work well and run smoothly.

A native app is simple to integrate with device technology such as touchscreens, GPS, and cameras.

A native mobile app adheres to all operating system rules and is vetted and authorized by the App Store, making them secure and dependable. First-rate features are guaranteed to be implemented quickly.

App design rules for Android and iOS differ. As a result, creating high-quality custom UI for a React Native app is challenging.

In some circumstances, developers may need to design bespoke wrappers to provide the app with native modules, components, and APIs, which takes time.

The Benefits & Drawbacks Of Using Swift

Consider the benefits and drawbacks of choosing Swift vs React Native. 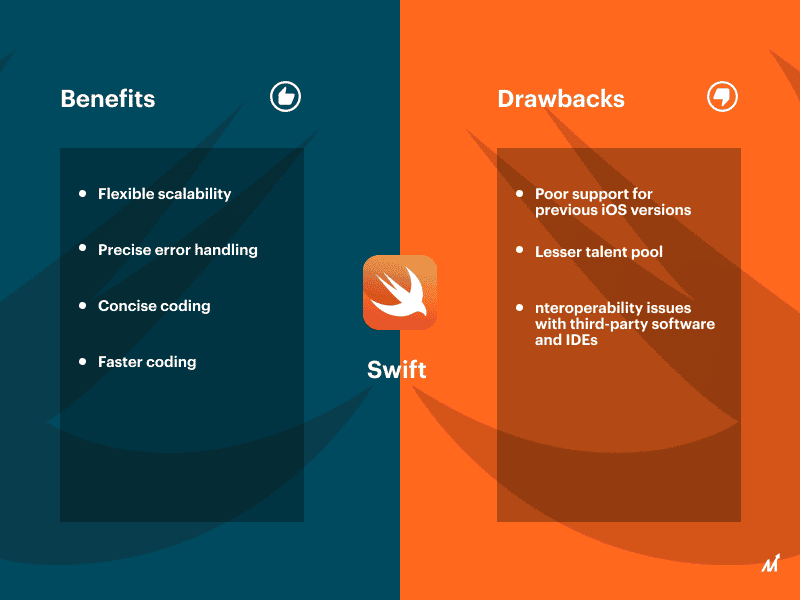 Using Swift, you can future-proof your project and add new features as needed. These types of programs are usually easy to scale.

Swift is incredibly concise, which means you require less code to do the same goal as React Native.

Swift was designed with high performance in mind. It has a straightforward syntax that allows for speedier app development.

Only 5.1% of the 83,053 respondents to a StackOverflow developer survey used Swift, making finding qualified talent difficult for organizations.

When it comes to Swift architecture, the following are some examples:-

The Xcode templates are used to generate components when we talk about choosing clean architecture. Surprisingly, these Xcodes perform admirably with time as the developer’s ability to make modifications in the future gets more accessible.

MVC lacks coding, making it challenging to write and maintain the program.

The main idea is to understand the role React Native plays as a middleman between Native as well as JavaScript threads. From there, JavaScript code communicates with native APIs and platforms.

Overall, React Native and Swift are excellent tools for developing iOS applications. You’ll need to take advantage of their differences to determine which one is best for your project.

React Native allows you to create an iOS app, Android app, as well as web app from a single code base. It’s a less expensive technology than Swift, but it lets you make high-quality apps. React Native’s biggest flaw is its lack of maturity. A lack of documentation, as well as frequent framework upgrades, may cause problems.

Swift is a powerful and intuitive programming language. As a result, it is more suited to large enterprise apps than React Native. Swift is also faster than React Native for creating iOS apps. If you opt to build a Swift app, you’ll receive clean code, a rich user experience, and also seamless performance.

Contact Markovate if you’re seeking an experienced React Native and Swift developer. Using our mobile app development services, business owners can get an advantage over their competitors. Our mobile developers are available to help you with your next app development project.