Being part of a world increasingly working on mobile devices, it has become imperative for companies to have performant cross-platform mobile apps that work seamlessly on all operating systems and cater to a more significant share of the customer base in particular. Therefore, the question remains regarding the best platform for hybrid app development. But we have particularly suitable info to clarify the loopholes.

When it comes to cross-platform mobile apps, the two leading frameworks are used in the modern-day tech realm notably. So that they can actually build high-performing cross-platform apps using Ionic and Flutter.

To begin with, both frameworks are inherently different, despite having the common goal of developing high-performing mobile apps. Both of them are helpful as well as easily accessible by the developers.

And if you think there will be many similarities between the working process of the leading cross-platform app development frameworks, you are highly mistaken in that case.

However, for any enterprise, deciding which one is best for their project can be tricky. In that case, people have different opinions about it.

In brief, this article will try to understand and conclude the debate between the Ionic vs Flutter framework to help enterprises eventually decide on the best mobile app development framework for their business requirements similarly. Since we are on the same topic, let’s discuss it in detail. 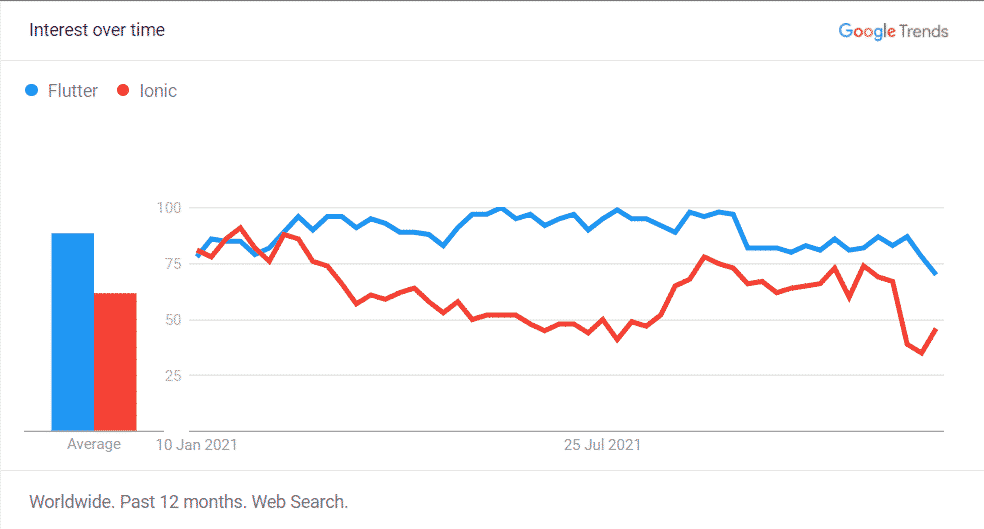 Do you know, after the 2021 developer survey, Flutter not only has the first place for the most popular cross-platform mobile framework but also 42 percent of software developers use Flutter for hybrid mobile app development in the first place. At the same time, most of the developers also flutter for development. Even though there are many other platforms, people usually move forward with flutter depending on its clarity and quality altogether.

Additionally, Google’s brainchild – Flutter, is a relatively scalable and fast cross-platform framework that particularly functions as a UI toolkit to create feature-rich and powerful cross-platform applications with surprisingly impressive features. Developed in 2017, the first version of Flutter was released in 2018 with the support of the ECMA standard accordingly.  Since then, it has been a huge success for flutter.

Owing to the fact that empowered with an intuitive interface, a library of elements, and many templates, Flutter support Dart programming language, utilizes Swift and Objective C for iOS integration and Java for Android.

The framework’s thriving user community with open-source libraries, resources, and answers to all programming dilemmas is what sets the Flutter framework apart from the rest of the mobile app development frameworks. It’s equally simple to use and easily manageable. Let’s find out the benefits of flutter in general.

While comparing Flutter vs. Ionic, Flutter has many decent selling points, like:

It is always advised to remember that every tool or technology has its definite downsides. They may or may not affect the flutter app development for your business. But here are some common disadvantages you may experience:

When to use Flutter Framework for Hybrid Mobile Application Development

Flutter can be used for the following purposes in general:

Do you know, Currently, there are more than 5 million apps built on Ionic available in the market. And approximately 86% of developers prefer using Ionic.

To define, Ionic is not only a well-integrated, open-source framework but also a UI toolkit used to build high-performing desktop & mobile applications ultimately. So, this is surely the go-to platform for development.

It uses well-known languages like HTML, CSS, React Native, Angular, Vue.JS, and JavaScript for integration with your backend. Therefore, the whole process becomes a lot easy. As a result, the development becomes flawless.

Ionic is the only framework that allows developers to create a single, simple-to-use JavaScript codebase. Moreover, it provides a lot of space for the developers to implement the tools for improvement.

In addition, here are a few advantages of using Ionic for cross-platform application development.

Now that we’ve covered some of the significant advantages of the Ionic mobile application development framework, now is the time to look at some of the disadvantages. This also has values while we discuss ionic vs flutter 2022.

When to use Ionic Framework for Hybrid Mobile Application Development

Meanwhile, Ionic can be used to develop:

Further Reading: How To Develop Apps Like Airbnb And Slack?

The best way to judge the ionic vs flutter framework is to see the differences between the real-world use cases in the first place. This can give us an overall idea of the whole scenario. In fact, people can decide depending on that information.

Here’s a list of some tech giants who are eventually entrusting Ionic and Flutter to meet their market needs.

Popular apps made with Flutter

Further Reading: 7 Reasons Why You Need a Mobile App for Your Business

The Winner – Flutter or Ionic?

With all of that read, we hope this article helps to clear up some of the similarities and differences between Ionic and Flutter so that you can make an informed decision owing to your own interest in cases of ionic vs flutter. This will surely redeem some of the essential queries that you formerly had.

However, the end decision of selecting the best-suited framework amongst the two will solely depend upon business objectives, user requirements, and where and how you plan to launch your app.

If you choose to build a cross-platform app with Ionic, you will learn and apply the tools and languages of the web, as Ionic uses the web platform open standards wherever possible to deliver great performance on mobile, desktop, and as well as web. To summarize, this will definitely guide you in choosing the right match for your business.

On the contrary, Flutter has a self-contained ecosystem well-equipped with the common languages, toolsets, and standards in the broader hybrid app development world.

Thus, if you choose Flutter, you will be doing things the Flutter way.

Lastly, the easiest way for any enterprise willing to have a performant app is to partner with a renowned mobile app development company with a successful history of developing mobile apps that drive value and impact.

Flutter vs Native: Will Flutter Replace Native Apps In 2022?

We've grown accustomed to accessing everything from our hands as our lives have become increasingly entwined with technology. Whether for Read Article

Are you considering developing a cross platform or a native iOS app for your business? How do you pick the Read Article 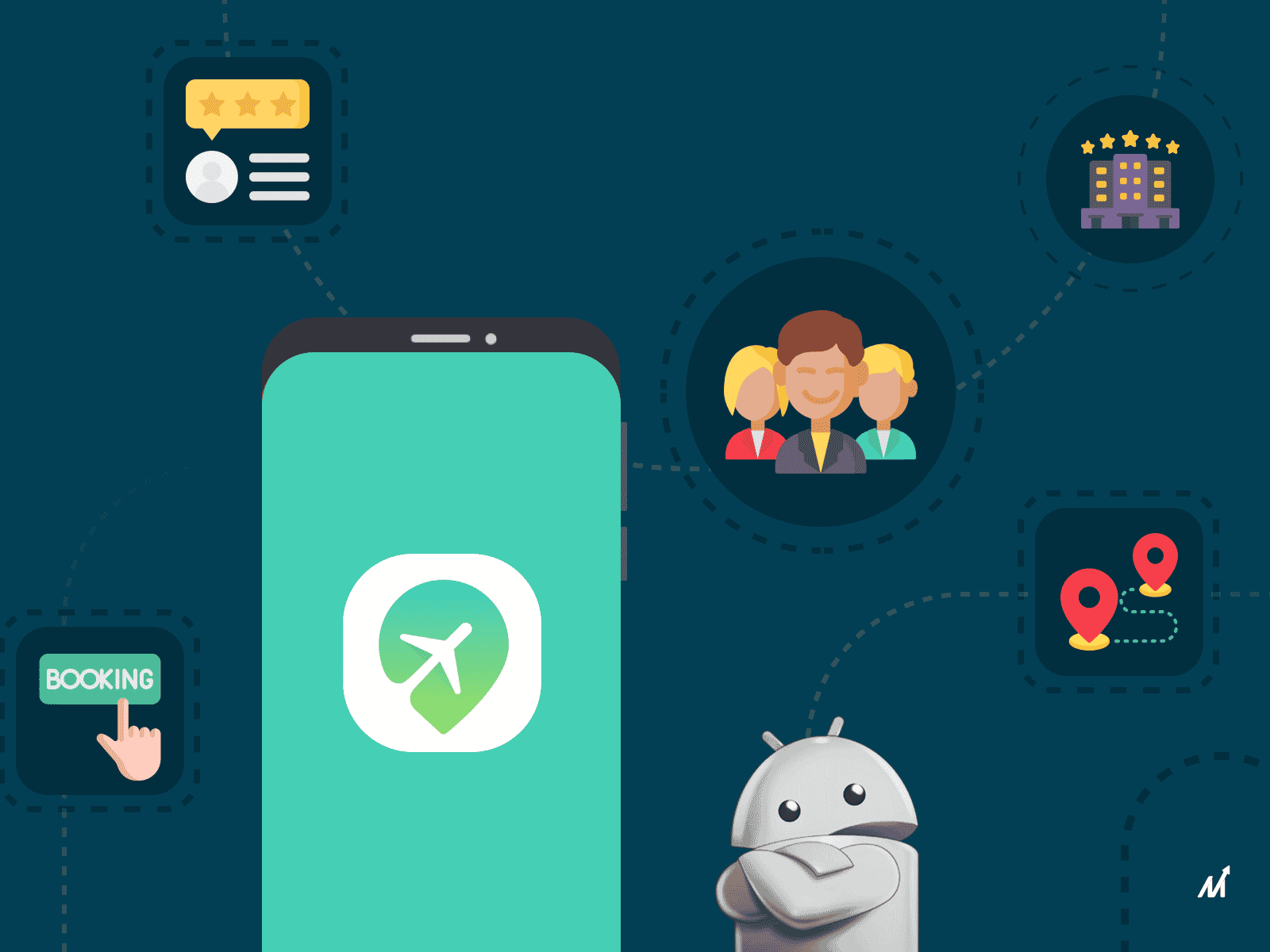