Recently Google has announced that they are taking away the Average Position metric from Google Adwords. In its place, they have bought in Search Top Impression Rate and Search Absolute Top Impression Rate. According to Google, these metrics are a better way to understand the Google ad rankings, but is that true?

For years, we have used the Average Position metric for a multitude of conversion optimization tactics. Let me share some and see if we can do the same with the new impression rate metric. 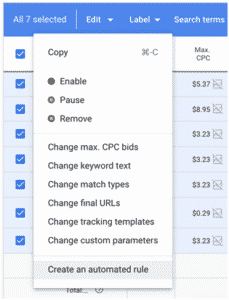 a) Create an automated rule.

b) Apply it to effect keyword bids.

C) Choose either Increase or Decrease bids. You can also use Raise bids to top of page CPC. However, remember that not all keywords have the option of raising bids to first-page CPC and top page CPC.

d) Set the action for the rule. In this example, our goal is to rank our ads on the top position. So, here we are increasing the position by 10%. The condition to do this is to do it whenever the Avg Position is greater than 3. Note that in this case, “less than” is the number 4 spot, 5 spot, and so on.

With the new change and removal of Average Position, the automated rule would be set like this:

The difference with this type of rule is that you cannot choose the rank you want for the ads. You can only use a percentage to set a baseline. In this example, it is less than 90%. However, by setting it to 90% or even 100%, we can set a position such as 1, 2, or 3, which we know are the positions that get the most clicks and conversions.

Now let’s look at how this method might not work as intended.

Google Adwords allows us to compete with other search ads. The ads are shown at a certain rank based on various factors. Such as Keyword Bid, Quality Score, Keyword Relevancy and CTR. But the most important factor to show our ad on a certain rank is how our ad outbid the competitor ad factors, which includes their bid. In some cases, when the competitor is running an ad for set locations and on set schedule, we can still show our ad on top.

Competitor A is running ads in Toronto between 10am to 6pm.

We are running ads in Toronto between 8am to 10pm.

Let’s assume the competitor’s bid is higher than ours and that their ad quality score is also better than ours.

Search Impression or Absolute Search Impression rate cannot be quantified for the ad rank. With these metrics, we are not just going to lose the optimization control to rank higher but we are also uncertain where are we ranking.

With my experience, the best metric so far has been the Average Rank position to optimize campaign performance. Without it, campaigns will be a shot in the dark.

A lot of times I have noticed that some of my ads convert better when they rank on a certain position.

Campaigns to sell a product work better with rank 3-4 because a user who is looking to buy a product is making decisions mostly based on the cost of the product. And they like to compare all the ads and links that appear. So even the ads that rank lower have a good chance of conversion for product campaigns.

But when it comes to high-cost service selling, it is always recommended to be on top. Every single link clicked by the user is viewed for more than a few seconds, and there are many factors that are considered when buying a service. Also, since most users are converted by filling out a form and not buying directly from the ad, they prefer to only choose the top few links. After all, not many people want to fill out several forms at the same time.

Without Average Position, this optimization method would be hard to achieve.

The click through rate of an ad at a certain position helps to adjust bids. If the CTR is high for rank 3rd, it means without paying for the top rank, we can get more conversions. However, without the Average rank as the metric, CTR would have a low impact on adjust bids of the keywords.

With the original Average Position metric, ad copy is usually optimized. For example, if there are four ads and one has a high rank and a high CTR, PPC optimizer like myself can identify why the particular ad ranked better than the other. But now with no ad rank, ad optimization would be difficult with just a CTR metric. A CTR metric shows the relevancy of the ad and how many times people click on the ad based on the impressions. However, this cannot explain whether my ad should be on top or not.

Why I think Google is doing this

Google is always looking for more ways to get advertisers to place ads on its platform. In 2017, Google came out with four ad spots instead of three, but now since they don’t want to increase ad rank spots, they are encouraging people to fight for the impression rate instead of the ad rank.

When you are optimizing your bids on impression share, you cannot directly set rules or increase bids based on Ad ranks. You can only raise the bids to show for more impression share.

An impression share metric for your keywords and ads could be between >10% to 90%. But lost impression share could be due to many reasons. Such as Targeting locations, the search volume of the keywords, low CTR, low bids, low-quality score or more.

What do we do after Sep 30, 2019, the date the Average Position rank disappears?

The system calculated ad rank could be anywhere from rank 1 to 8 for page one or 9 to 16. Here are some ways I came up with to still be able to optimize the campaigns without an average position.

Set the percentage impression share to target 100%. Make sure you do this only after the campaign has some data and has been running for at least a week or two.

Let me know if you have any more suggestions to battle the new changes coming to Google Adwords or if you are using any other set of metrics to optimize your ads for a better impression share.

If you think your website design and marketing success are mutually exclusive, think again.  Why? Because they are the two Read Article

How Can Businesses Evolve Their Marketing Strategy Amid The COVID-19 Crisis?

We are living in history right now. The COVID-19 pandemic has left no industry untouched and we can expect it Read Article