Cardano vs Solana: Which Blockchain you should choose for your business? 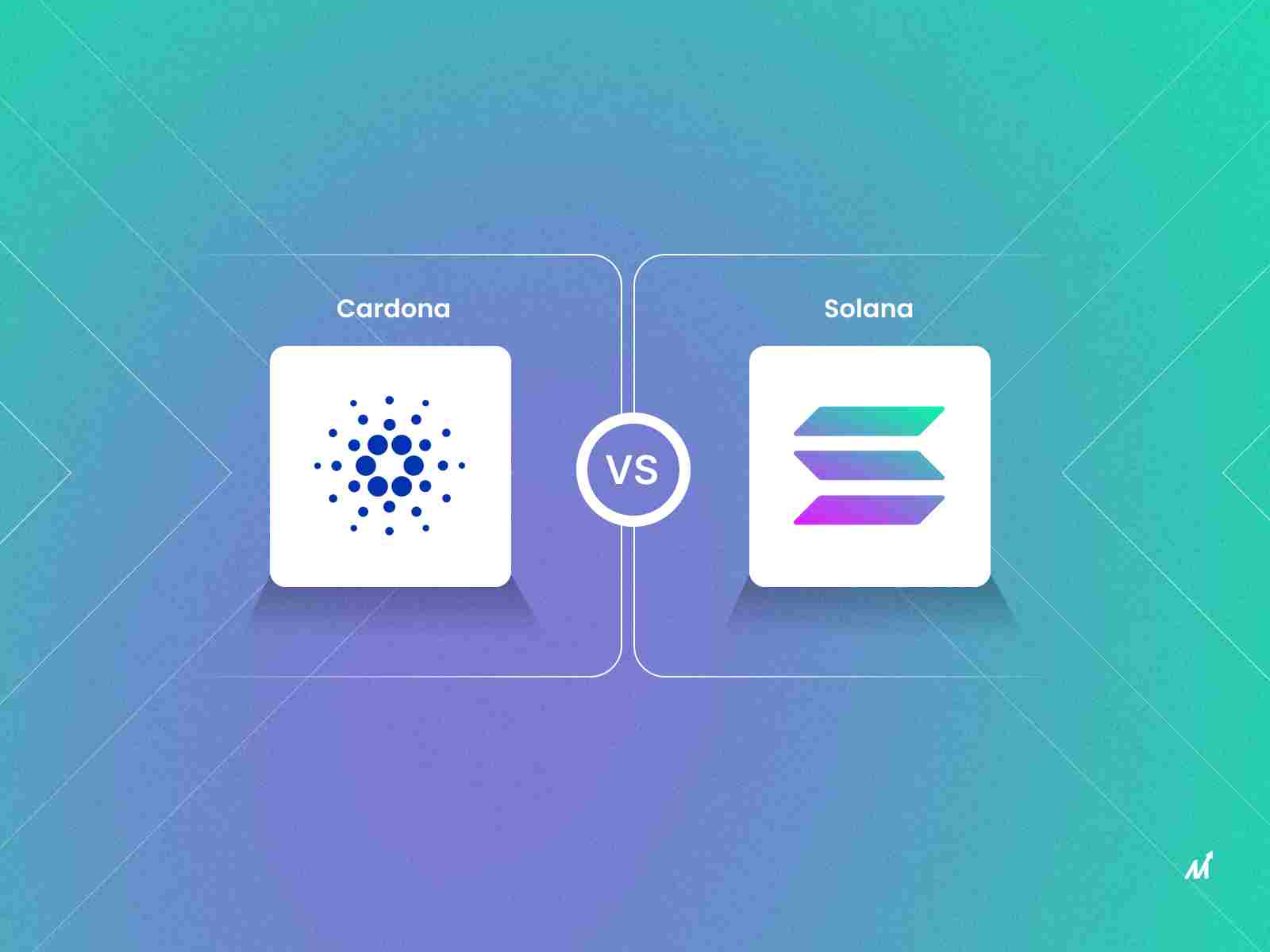 In the last few years, with the prior bullish run in cryptocurrency, Cardano and Solana have attracted the attention of aficionados. Some people desire a true conflict between Cardano vs Solana, while others have investments in both. The two cryptocurrencies have a wide range of uses and are widely used. They have some similarities and differences but are also quite comparable.

In terms of development, Solana is faster than Cardano. Solana’s success has been outstanding for both users and investors. In a year, the token rose from a few cents to more than $50, and the blockchain’s speed and processing capacity have piqued many people’s interest. On the other hand, Cardano has struggled in terms of price since its ICO frenzy a few years ago.

Cardano is a blockchain platform that uses proof-of-stake and is the first to have its methodology and research verified by peers. For the highest levels of sustainability and security, it employs cutting-edge technology. Applications, systems, and communities are supposed to be able to benefit from decentralization. Cardano employs the Cardano Foundation’s Ouroboros consensus method, a verification mechanism. Users are allowed to stake their ADA (the native token used in the Cardano ecosystem) and take part in the transaction validation process as part of this mechanism. Users have the option of managing their staking pools or choosing to assign their ADA to one that already exists. 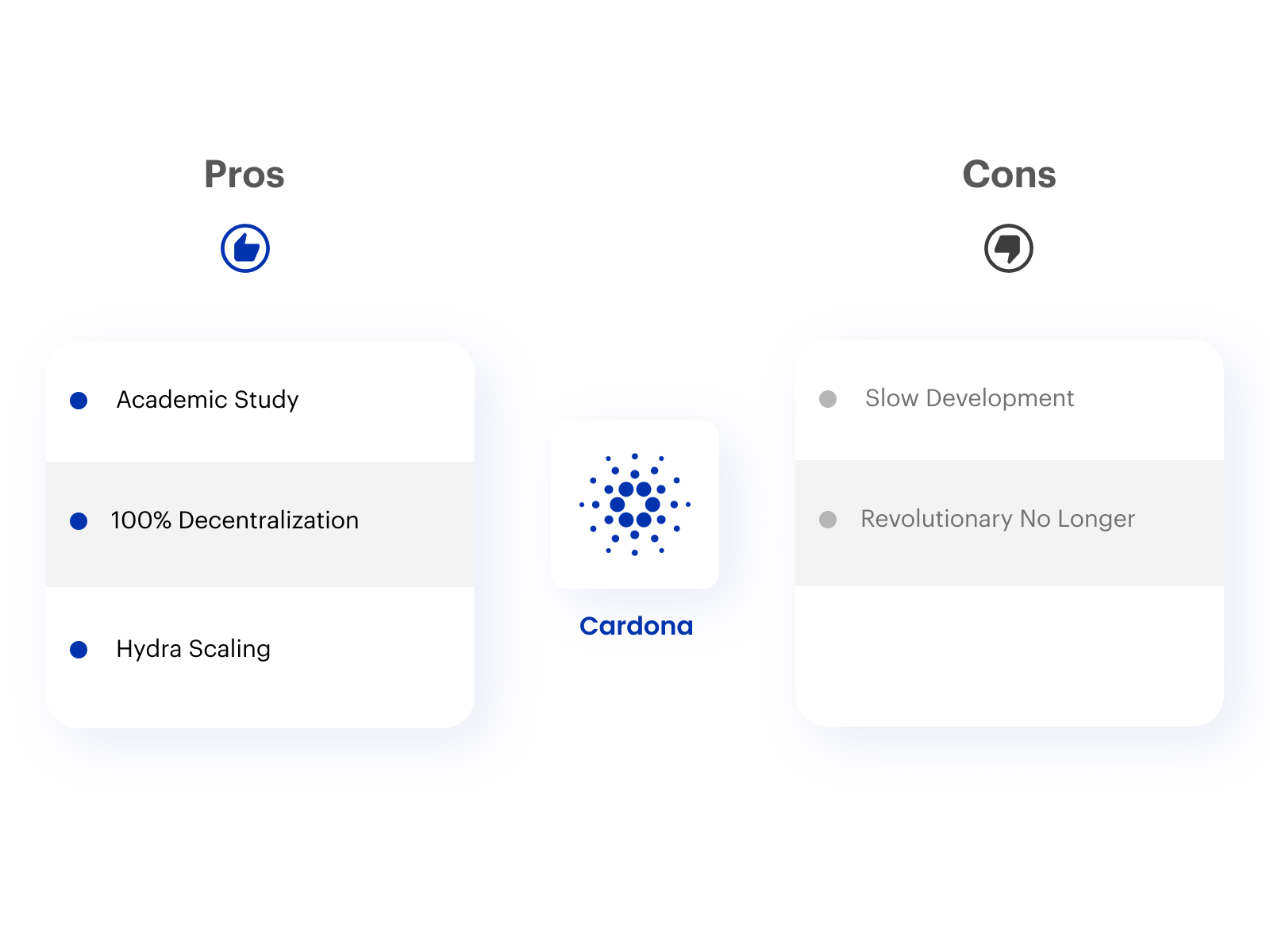 A Layer 1 blockchain system known as Solana uses Proof of History (PoH) as its consensus algorithm. It is based on the blockchain’s ability to validate the time gap between two events. The transactional throughput on the network is increased to over 50,000 transactions per second thanks to this technique, which operates before the Proof-of-Stake consensus and is scaleable up to 100,000 transactions per second. Solana does not require Layer-2 scaling techniques because this computational capacity can be simply obtained at the blockchain’s base layer. 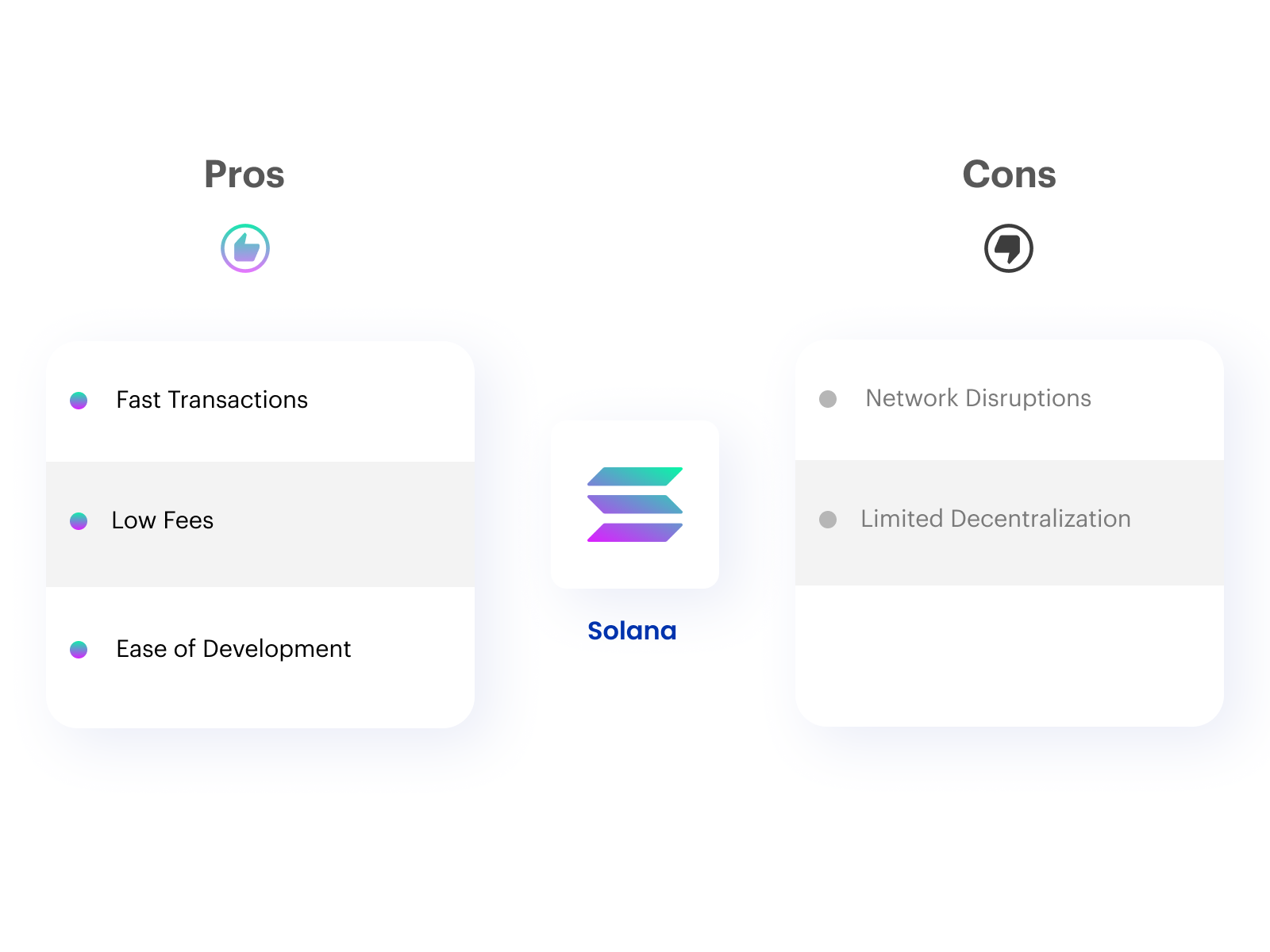 Cardano vs Solana: Differentiating through features for businesses

The transaction fees significantly affect the value of the two coins. Cardano’s transaction costs are around $0.18, compared to Solana’s minuscule $0.00025. Solana is far more valuable in this regard, but Cardano’s stability cannot be underestimated.

Both have evolved in the last few years. The initial Solana whitepaper was produced and distributed in 2017. However, the network went live in 2020. Anatoly Yakovenko wrote this paper, but it took that long to complete. Solana now supports Rust, C, and C++ programming languages. Cardano was created to compete with Ethereum, as Charles Hoskinson was one of the coin’s inventors. The network made use of the Ouroboros proof-of-stake protocol. This consumes significantly less energy than Bitcoin or the original Ethereum. In September 2021, Cardano launched a decentralized finance service and began to support smart contracts. As a result, Cardano has made significant progress in catching up to other networks.

Cardano has a coin limit of 45 billion tokens. Solana is theoretically limitless, but there is a yearly cap based on inflation, so it isn’t always accessible for all. The amount of Solana coins manufactured each year is a dynamic aim. Therefore each year will be different.

The Ouroboros consensus protocol, which was developed during the development of Cardano, is the protocol that is now in use. The stake pool’s delegates receive these benefits, allowing them to participate in consensus while earning ADA. Solana and Cardano differ slightly in terms of how they establish consensus. 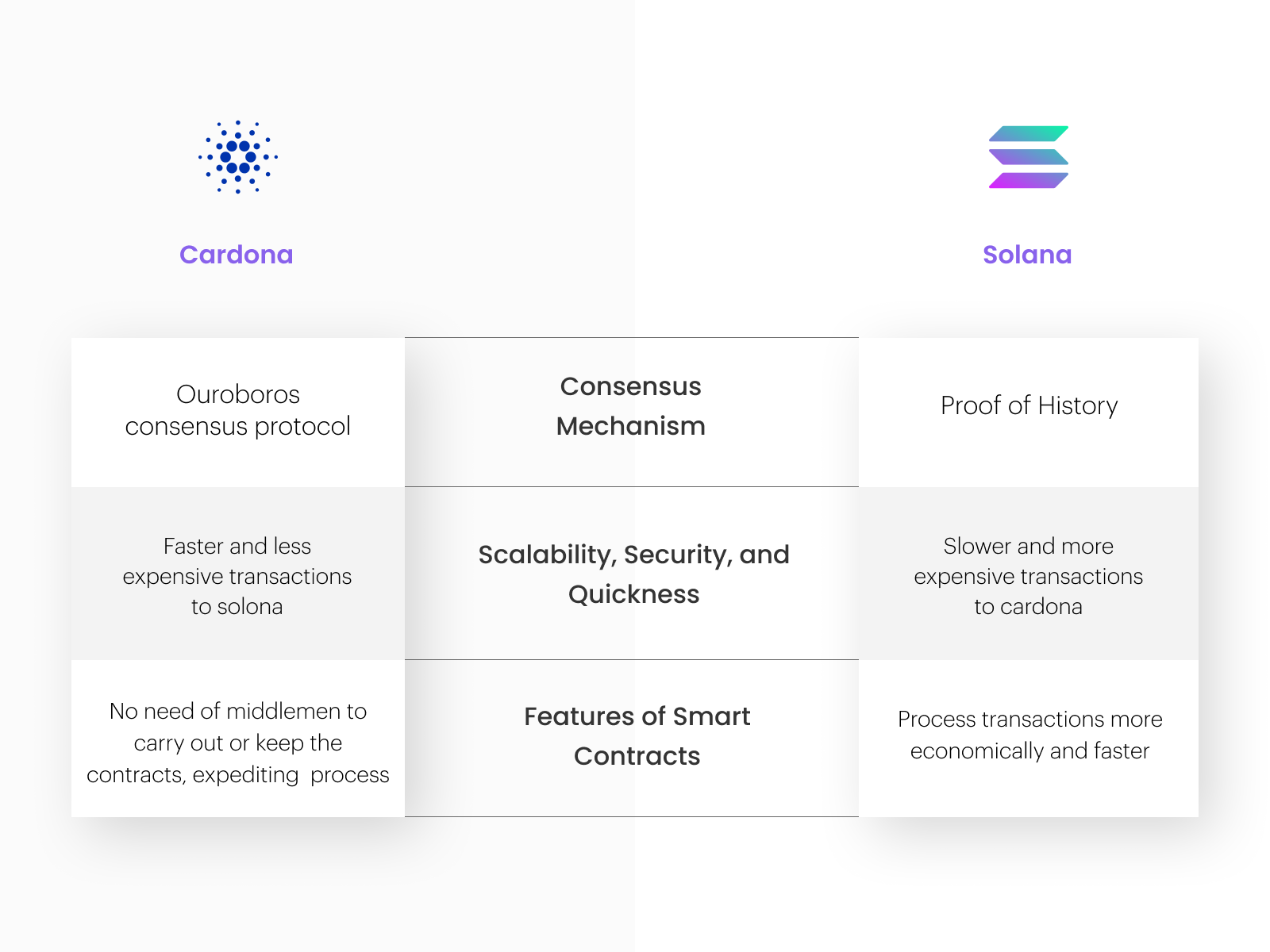 Cardano’s ADA coin enables much faster and less expensive transactions. The PoS algorithm eliminates the requirement for several machines because the nodes will handle the throughput. Cardano is one of the most dependable Blockchains in cryptocurrency transactions due to the Proof-of-Stake (PoS) algorithm.

Cardano is a platform that combines blockchain technology with tokenized smart contracts and smart contract platforms. The original Cardano (ADA) cryptocurrency can be transferred between other blockchain users thanks to the CSL. Cardano is still less suited to those who wish to conduct their ICOs and perform asset tokenization than Solana is.

Choosing between Cardano and Solana for your business?

When deciding which cryptocurrencies are the better investments, there are several things to consider. Solana, a “better and faster” variation of Ethereum, allows dApp transactions to be executed in a largely decentralized fashion. Solana is far faster than Ethereum, its biggest rival, although Ethereum has undergone significant improvements in the past year. The Solana network’s ability to defeat Ethereum will now be in focus. The best-case scenario is that it serves a few particular but unidentified purposes.

It is an intriguing project because Cardano will surely be more dependable than Solana. Since it is peer-reviewed, everything is thoroughly tested before being made public. This indicates that Cardano should keep its reputation as a robust network. Additionally, it has a stronger focus on several Third World states like Ethiopia and other African countries. In Ethiopia, the network has been used to authenticate identities and bank the unbanked. According to Cardano’s founder, Charles Hoskinson, seeking to break into these niche areas is a strategic decision.

In contrast to other ecosystems, like Ethereum, both offer strength and speed. Cardano appears to focus on smaller, frequently ignored markets, making it a new approach. In contrast to Solana, which is only sometimes the case, the Cardano network is also quite dependable. How long you want to wait for the value to be unlocked is one of the things you will need to consider. Cardano, after all, moves slowly, but when something is finished, it is finished. Solana is far more affordable yet appears to be less reliable. Both networks have a good chance of surviving and thriving in the future, but they might be put to quite different uses.

We at Markovate have been developing blockchain-based applications for almost ten years. This implies that we can advise you on which blockchain platform is most appropriate for your particular situation and create your solution from scratch.

Get your project going right away by getting in touch with our blockchain development team for further details!

Further Read: Cardano vs Ethereum – Which Is Better For Your Blockchain App?

1. Will Cardano be better than Solana?

Yes, in some ways. Cardano has a secure two-layered design. This enables Cardano to handle transactions and deploy smart contracts.

2. Which is faster: Solana or Cardano?

Cardano vs Solana: Which Blockchain you should choose for your business?