Top Reasons to Go with React.js for App Development

Creating dynamic UI is a time-consuming and difficult task, regardless of the programming platform. You’ll need a lot of time, effort, and concentration to design each website component. React.js, on the other side, is a JavaScript library that dramatically simplifies the construction of user interfaces and makes life easier for developers.

But, how does React stack up against other frameworks? All frameworks offer their own advantages and disadvantages, making them non-interchangeable and dependent on the goals you set.

Facebook created and maintained React.js, which is essentially a JavaScript library. React is an efficient, expressive, and flexible open-source JavaScript framework toolkit for building simple, quick, and scalable web application frontends, according to Jordan Walke, the developer of React.js.

It has dominated the front-end development space since its inception.

With so many firms utilizing React.js, including some of the world’s most well-known brands, React must provide some incredible benefits. Right?

According to a recent Stack Overflow Developer Survey, React.js is the most popular web framework.

Want to know more about other mobile app development frameworks, read this: Best Mobile App Development Frameworks for 2022 (and Why?)

Why should you use React.js in your next project? React.js’ features

The developer community adores React.JS because of its extensive capabilities. The following are some of the features that set React.JS apart from the competition:

It is one of React.JS’ most important features that enable the quick and flexible development of applications.

React can duplicate a web page in its virtual memory thanks to its memory reconciliation technique. As such, a virtual DOM is a representation of an original DOM.

The virtual DOM re-renders the whole user interface with each alteration in the web application. Only the changed components are updated in a virtual DOM representation rather than all of them.

As a result, React.js speeds up and lowers the cost of app development.

You should consider using React.js for app development because of the one-way data flow. The data flow in React.js is unidirectional. As a result, developers are unable to edit any parent component directly. To make modifications to the components, they must use the callback function. One-way data binding is the name for this method.

React.js employs Flux, a JavaScript-based app architecture, to manage data flow from a central location. Using a unidirectional data flow in React.js gives developers more control over their online or mobile applications. This boosts both the application’s flexibility and efficiency.

React Native is a specialized React.js renderer. It uses native components rather than web components.

An experienced developer needs to be familiar with the fundamental React.js ideas to grasp React Native thoroughly. Components, state, and props are among them.

Following this level, a developer must learn everything there is to know about React Native, including the native components.

React Native adapts React code to run on Android and iOS. It also gives you access to the platforms’ native features.

React.js, as previously stated, is the greatest framework for building engaging and interactive user interfaces for mobile apps.

React.js renders and updates the appropriate components in the event of data mutation. It creates a simple view for each applicable state. This feature improves the readability of the code and makes debugging easier.

React.js uses a component-based architecture. Another way, the user interface of a React-based mobile or online project is separated into numerous components. Each parent component functions according to its own set of rules. In place of using templates, the logic is written in JavaScript. This allows React.js developers to pass data throughout the mobile app without having to worry about the DOM being affected.

React.js components are crucial in establishing how applications interact and look.

Why Should You Use React.js In Your Upcoming Project? Key Benefits

Of course, if you asked us what front-end technology will be ideal for software development in 2022, we’d say React! In terms of speed, development flexibility, and popularity, it’s on par with Angular.

So, if you’re wondering why you should use React in your next project, we’ve got seven reasons for you to consider! 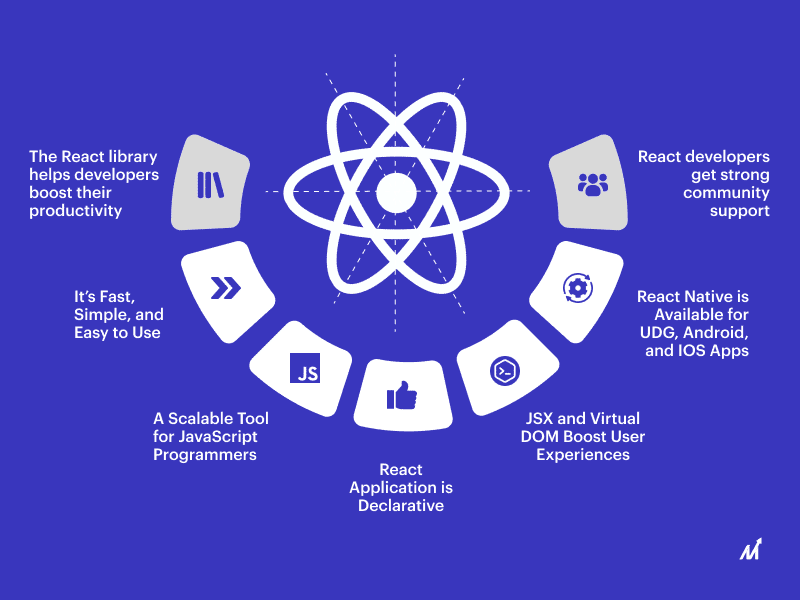 “Is React.js a framework or a library?” you might think.

React.js is a reusable package of code that allows developers to create an interface for mobile apps, web apps, and websites.

An experienced developer can reuse components several times with React. He can make use of React libraries to find already written shortcodes, integrate them into their workflows, and move on to other coding tasks instead of writing the same code repeatedly.

React.js saves time and reduces time-to-market for developers while also allowing for rapid changes to the appearance and feel of their applications. “Peer-reviewed” code can increase code quality in addition to eliminating coding errors.

React.js has the advantage of creating discrete components that make up the broader UI and then using simple HTML and JavaScript components to create more complex UI functionalities.

Dynamic DOM can be used with React.js to update dynamic UI components without requiring users to reload the page, which speeds up the loading of native apps and websites. Because people like fast-loading online pages and apps, React code is extremely valuable when creating front-end web applications due to its speed and agility.

3. A Scalable Tool for JavaScript Programmers

React allows developers to integrate interactive UI components in HTML, PHP, JavaScript, and other code layouts in a scalable manner, thanks to the capabilities outlined above. React also offers several React.js add-ons that may be used to improve an app’s functionality and workflow.

Rather than teaching a computer how to produce a given outcome step by step, React allows developers to declare the outcome they want to accomplish and then leave it to the computer to figure out how to get there.

React’s declarative API also leverages reconciliation, so you don’t have to worry about every change that occurs.

JSX is a JavaScript extension that allows developers to include dynamic content in the layout of a webpage by using HTML-style code. This allows web pages to include interactive components that make users’ experiences more engaging than they would be if the information was static.

Using HTML without React.js or JSX, a web page would reload every time a change is made to the screen, which would slow down the process and discourage users from using it.

Instead of refreshing the full web page or UI, React.js allows developers to use the Virtual Document Object Model (VDOM) to update only new components. Take, for example, a blog entry.

On a blog page developed with React.js, you can nearly quickly read, submit, and make a remark without having to reload the page.

6. React Native is Available for UDG, Android, and IOS Apps

You may also use React Native to construct React app on mobile to use React.JS’ interactive capabilities.

React Native is a mobile-friendly framework that can be used to create mobile apps from the ground up. Interactive components such as animations, social media buttons, and live polls will be supported in any smartphone or tablet app you design.

React is also search engine friendly, allowing websites and web apps to be optimized for search engines like Google Search and Bing.

React.js has one of the most active mobile app design and development communities of any programming language today. It’s also open-source, which means anybody may download React code, alter it, improve it, and share it with others to help the library continue to improve.

Developers can also collaborate with the community on projects or ask questions. They are likely to receive helpful assistance from another developer.

Given your understanding of the benefits and best practices of the React.js framework, it should come as no surprise that most large and mid-sized businesses are using React.js Development Company | Mobile App Development Services to create their websites user interfaces. You may rely on Markovate’s React.js professionals if you need a React.js developer who can fully comprehend your needs and deliver the best outcomes for your projects.