Kotlin vs Java: Which To Choose For Your Android Project? 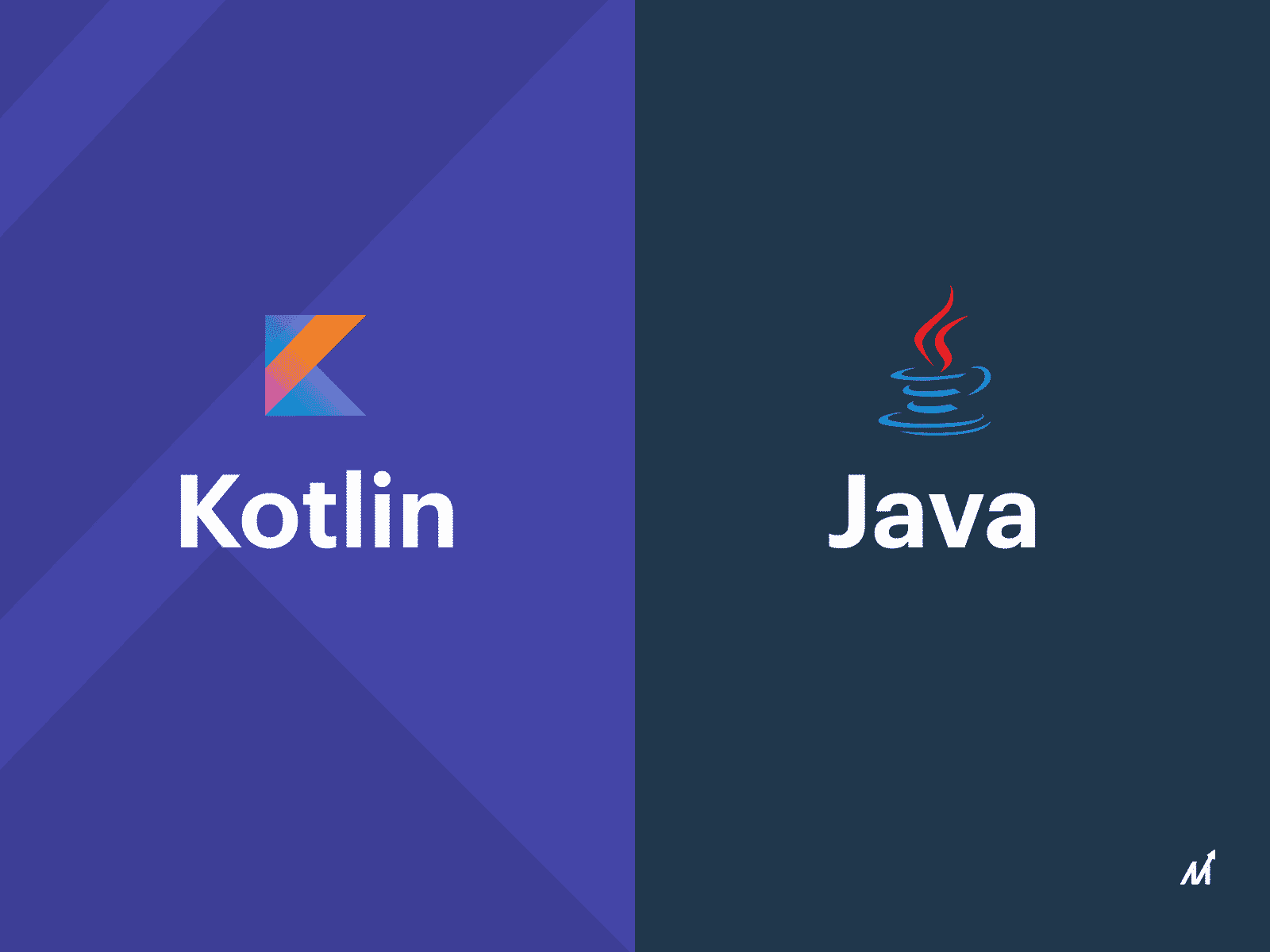 Kotlin and Java are two predominant programming languages that rule the app development world. Especially when it comes to Android app development, you will find that these two slay the realms. To scale your business through digital breakthroughs, having an android app makes more sense, but which language to choose can be complex. A developers’ favourite- Kotlin and Java have been used for creating hundreds of thousands of apps in the past and continue to do so. So, if you’re planning to get an Android app developed, you must know the difference between the two.

Now, given the popularity of Kotlin currently, is it more favourable than Java for creating Android apps? Kotlin vs Java- Which is better? Questions related to these two could be many, so let’s dive deep into this topic and find out more about Kotlin versus Java and which to choose for your next Android project.

Kotlin is a blend of reactive and object-oriented programming that is easier, cleaner, and faster to compile. It can run on practically every platform and device since it can compile code to byte-code and execute it on JVM. Kotlin, as the programming language, is used by large tech companies to create Android apps. Trello, Twitter, and Netflix are some of the well-known applications built with it.

Java was originally known as OAK. It was initially developed to manage set-top boxes and portable devices, but OAK turned out to be a failure.
In 1995, Sun Micro-systems renamed OAK as Java and revised this language to reap the gifts of the WWW (World Wide Web).
In 2009, Oracle Corporation acquired Sun Micro-systems consuming three paramount Sun software: MySQL, Java, and Solaris.

Most developers even to date use Java for Android applications, one of the first object-oriented programming languages. The primary reason is that Java was used by the Open Handset Alliance to create the Android OS user interface (UI). It is compatible with almost any server, gadget, and operating system. Java programming code can also run on JVM. Numerous well-known applications, like Signal, Cash App, and Spotify, were created by app developers using Java.

Kotlin Vs Java: Comparison at a glance

Now that you know the fundamentals of Java and Kotlin, let’s talk about their main differences and understand the Kotlin vs Java argument in depth. Take a look at their primary differences at a go. 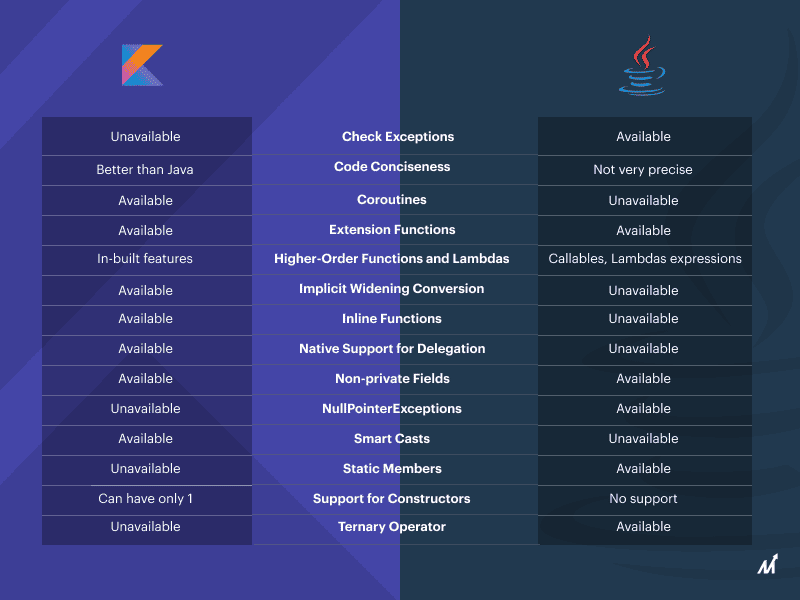 Kotlin: In Kotlin, on the other hand, it is not feasible to provide variables or objects with default null values. The code will compile incorrectly if we attempt to do this. Kotlin does not have NullPointerExceptions as a result. However, it is feasible to explicitly declare the variable as nullable if the developer wants to assign a null value.

Java: The fact that Kotlin requires significantly less code than Java is one of its main advantages. It is a highly compact language, which lowers the possibility of making coding mistakes and simplifies developers’ tasks.

Kotlin: Kotlin’s conciseness, which often needs fewer pieces of code than Java to express the same functions, makes it easier to manage the writing of huge projects. Additionally, it knows how to be simple and to the point without sacrificing the clarity of syntax.

Java: On the one hand, while using Java, programmers must create the fields (or variables) that will be used to hold the data, as well as the function Object() { [native code] }, getter, and setter methods for those fields and variables (). The truth is that these classes have zero (or, at most, very little) functionality and are primarily designed to hold data.

Kotlin: Kotlin, on the other hand, offers a simpler method for creating classes that can contain data by only putting the “data” keyword in the class description. The function Object() { [native code] }, getter, and setter functions will then be automatically generated by the compiler for several fields and variables.

Java: Java programmers have examined the support for exceptions. They must thus identify and specify exceptions. On the one hand, this could be time-consuming and annoying. On the other side, it ensures that mistakes are handled and the code is resilient. So there are benefits and drawbacks to checked exceptions support. In the end, it comes down to what each developer values most.

Kotlin: On Kotlin, checked exceptions aren’t supported. Developers using Kotlin do not need to detect or declare exceptions. Is this advantageous? It depends.

A question mark (?) is typically used as a wildcard in coding to denote an uncertain type (variable, field, or parameter). Kotlin does not offer wildcards, unlike Java. Instead, it features type projections and a declaration-site variant as a substitute.

There are no data type requirements for variables in Kotlin. Java is an exception since all variables must have their data types declared. Kotlin programs don’t need a semicolon, but Java ones must. However, because of its interoperability, Java code may be generated using Kotlin and vice versa.

Kotlin was introduced to the market more than 15 years after Java and fixed several problems that previously plagued Java developers. They were inspired to transition to the more modern platform as a result.

Kotlin is demonstrating that it is a practical, contemporary, and straightforward programming language, with Google stating that it is now its language of choice for Android app developers. Moreover, Both Java and Kotlin may create effective, useful apps. However, Kotlin is now superior to Java for Android due to Google’s continued support for it in its libraries, tools, documentation, and learning materials.

1. Easy to use and eventually master

The fact that Java is one of the most accessible programs to use and is less complex than C++ is one of its most lauded characteristics. You can quickly pick up reading, writing, and maintaining Java code.

The two memory components are stack and heap. In a Java application, a variable is always assigned to the heap or stack memory areas.

It is platform neutral and aids in the writing and compiling reusable code. Using this technique, you may break down the more complex modules into simpler ones. 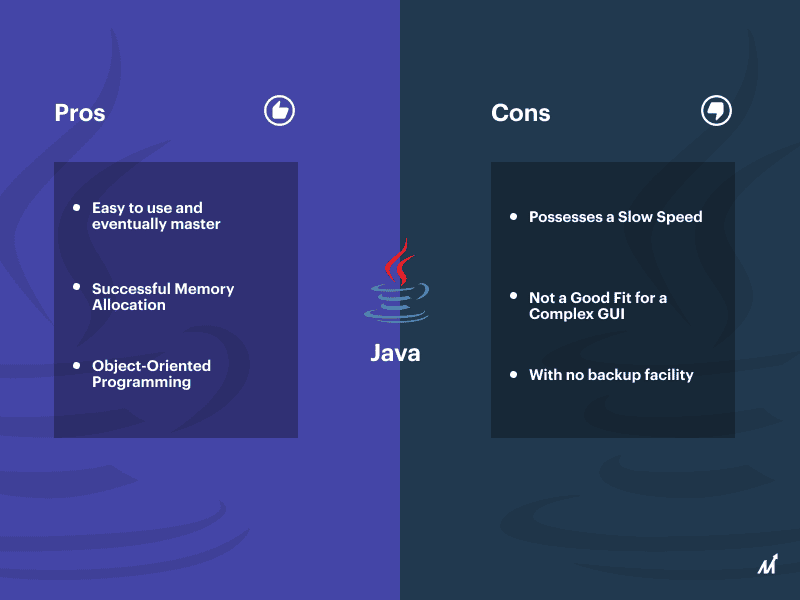 Java is slower than native languages like C or C++ and consumes much memory. This is primarily due to the additional degree of abstraction and processing performed by JVM. Garbage collection is used to allocate memory, and the software performs poorly each time.

2. Not a good tit for a complex GUI

Applications created for Android using Java have a completely different default appearance from those created in native languages. Although Java has GUI builders, none of them is appropriate for creating intricate UI. These GUI builders also have a lot of inconsistencies.

3. With no backup facility

One of its main shortcomings is that Java offers no backup capability to its customers. It is primarily concerned with data storage.

Because of the compatibility already in place, developers may quickly transfer code from Java to Kotlin or add new functionality. If necessary, the two languages can be utilized jointly.

Kotlin’s mission is to improve Java’s features. Therefore, if you have any experience with Java-based mobile programming, you may also use those talents for Kotlin development.

Kotlin, which debuted on the market in 2011, has shown its dependability. Additionally, it went through several beta and alpha iterations before being formally launched. The UI is, therefore, beneficial daily and has few issues. 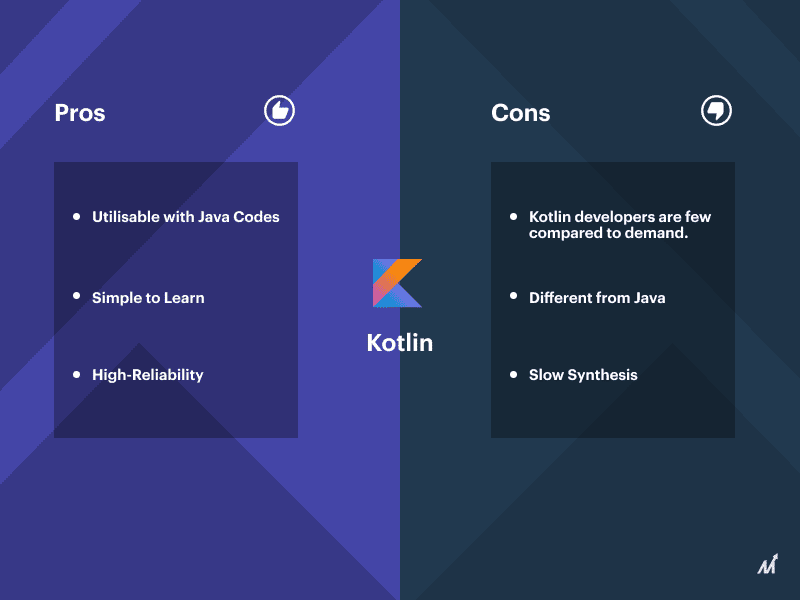 The demand for Kotlin developers is still greater than the supply, despite talent having increased since Google announced its support for the language in 2017.

Kotlin is an original concept rather than a replica of Java. Therefore, additional costs for training, as well as time to become comfortable with the program, would be required.

In some circumstances, Kotlin is quicker than Java during the continuous build. Despite being slower than Kotlin, Java may produce cleaner builds.
Kotlin Vs Java: Let’s have a look at the Similarities.

Kotlin has a somewhat different appearance and feel when writing and reading it than Java. However, this does not imply that its usefulness is altered. All current Java code is fully compatible with Kotlin. Kotlin can run on Android or the JVM since it converts to the same byte-code.

To the extent that they both compile to Bytecode, which the JVM executes, Kotlin and Java are comparable. In addition, each one supports object-oriented programming.

Are enterprises making a smart switch from Java to Kotlin?

Many companies have expressed interest since Kotlin was made the official language for creating Android apps. Since the Kotlin vs java performance discussion, there has been a stir in the Android app development business as some people prefer Kotlin, and others think Java is the best. Even well-established businesses have migrated to Kotlin for their commercial apps, not only start-ups. Evernote, Pinterest, Uber, Square, and Pinterest are top brands.

Pinterest is a well-known website for social networking and picture sharing. The business first built its application in Java. But due to Kotlin’s stability, it chose to convert in 2016.

Evernote’s well-known note-taking app migrated to Kotlin for improved efficiency and stability. Kotlin is far more versatile in these areas than Java is.

Why choose Markovate for Kotlin and Java Android apps?

Depending on the app’s needs, Markovate explicitly implements the fundamental functions of Android apps using Google’s suggested Android architecture. This entails specifying how the functionality of your program interacts with other components, such as the database and the user interface. As an Android app development company, we also employ the most recent and best technologies for developing Android apps to create applications specifically tailored for your unique use case, budget, and timetable. To create safe and secure Android apps, we choose programming languages that are compatible with one another, such as Kotlin and Java.

Kotlin, considering its convenience and popularity, looks to be the best choice for Android app development. It is being used by plenty of businesses and developers, and the language will probably keep growing. Java is still a fantastic general-purpose language and has long been popular among Android users, so its replacement won’t happen just away. But it may gradually shed its charm, given that change is the only constant when it comes to programming and tech.

Is Java good for Android development?

Java was the official language of Google, and numerous apps on Play Store were originally made on Java. It is one of the most supported programming languages, best known for its features and the ability to create the best android app developments.

Which language is best for Android development?

Java has been used for android app development for the last 20 years. It was also the official language of Google. However, this has changed ever since Kotlin was released in 2016. Due to its adaptive characteristics that are more concise and secure, Kotlin is preferred now.

Which is better for an app developer: Java or Kotlin?

Kotlin as a programming language improves the app’s readability and is easier to maintain, making it efficient for the developers to read, write and maintain. Kotlin can be used for almost anything. However, Java is mainly about web apps, servers, and android app development. 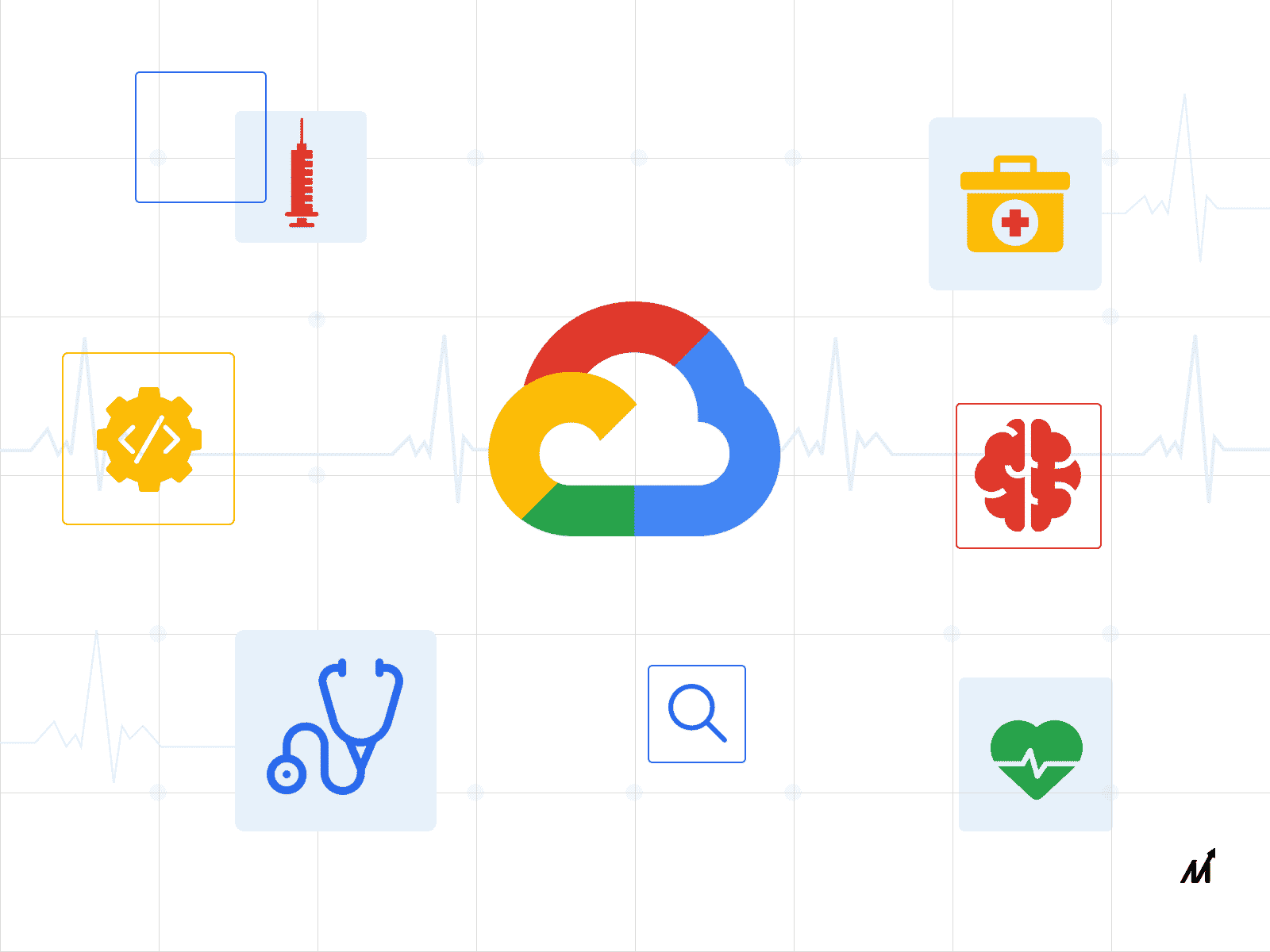 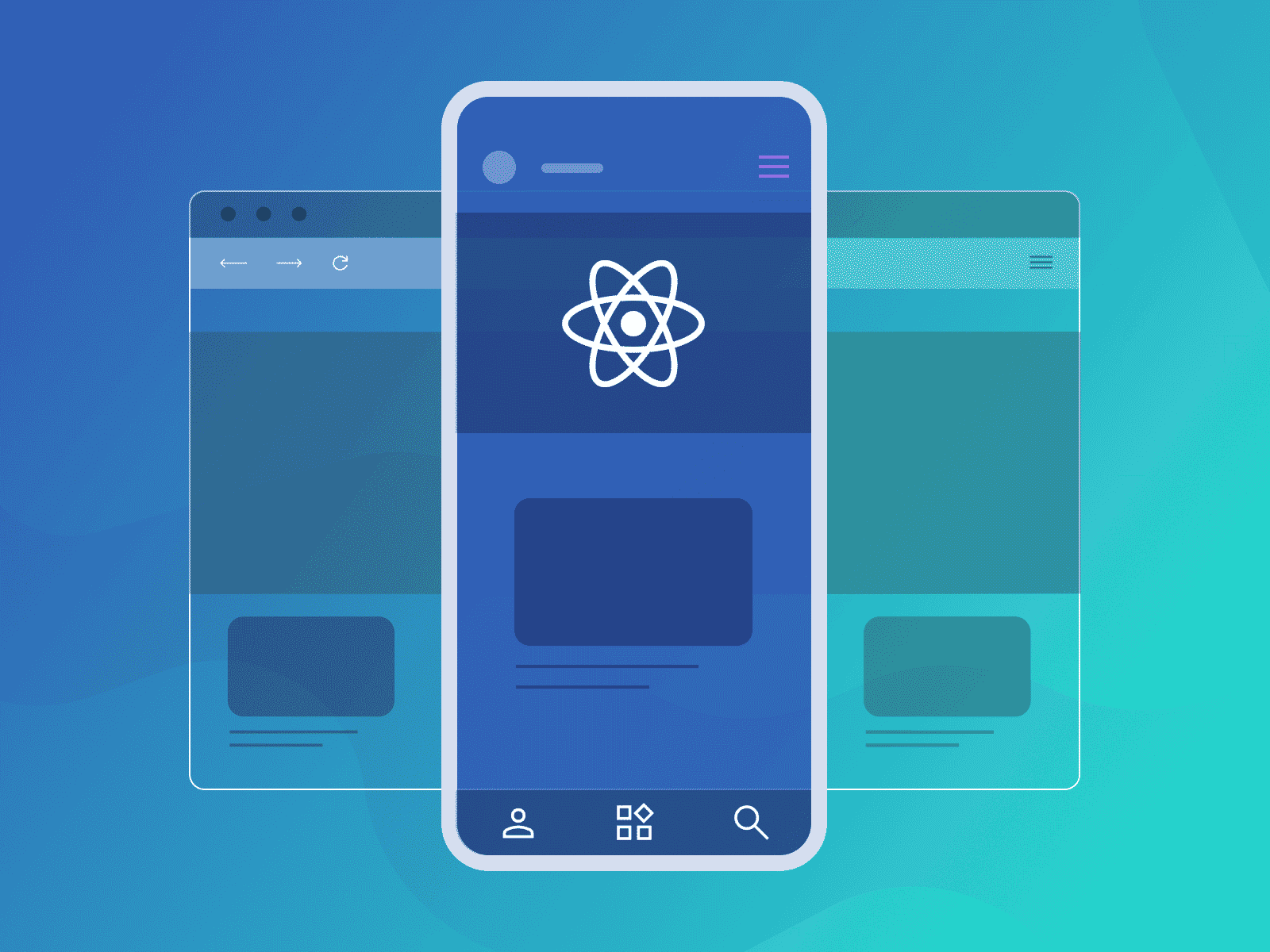 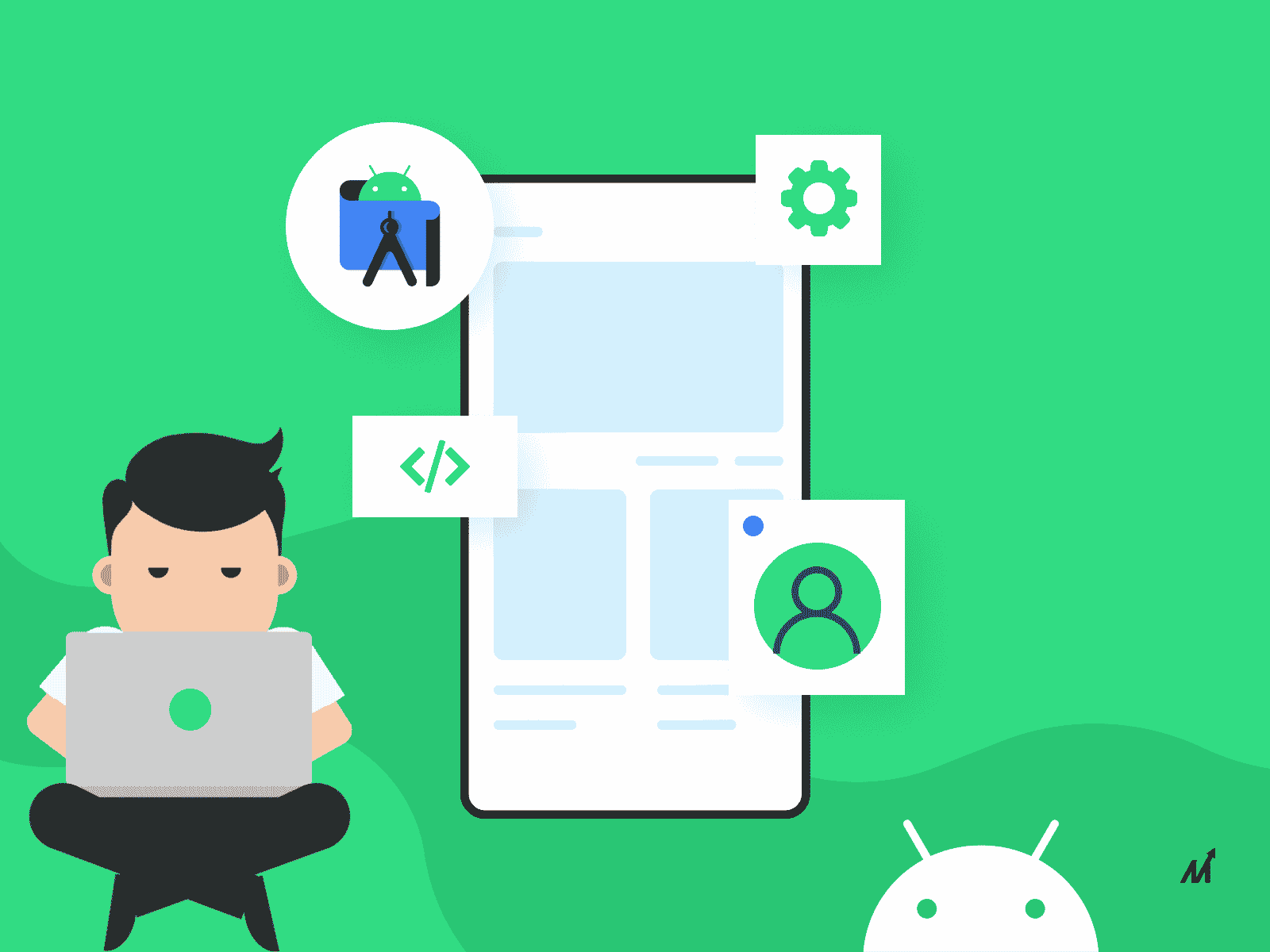