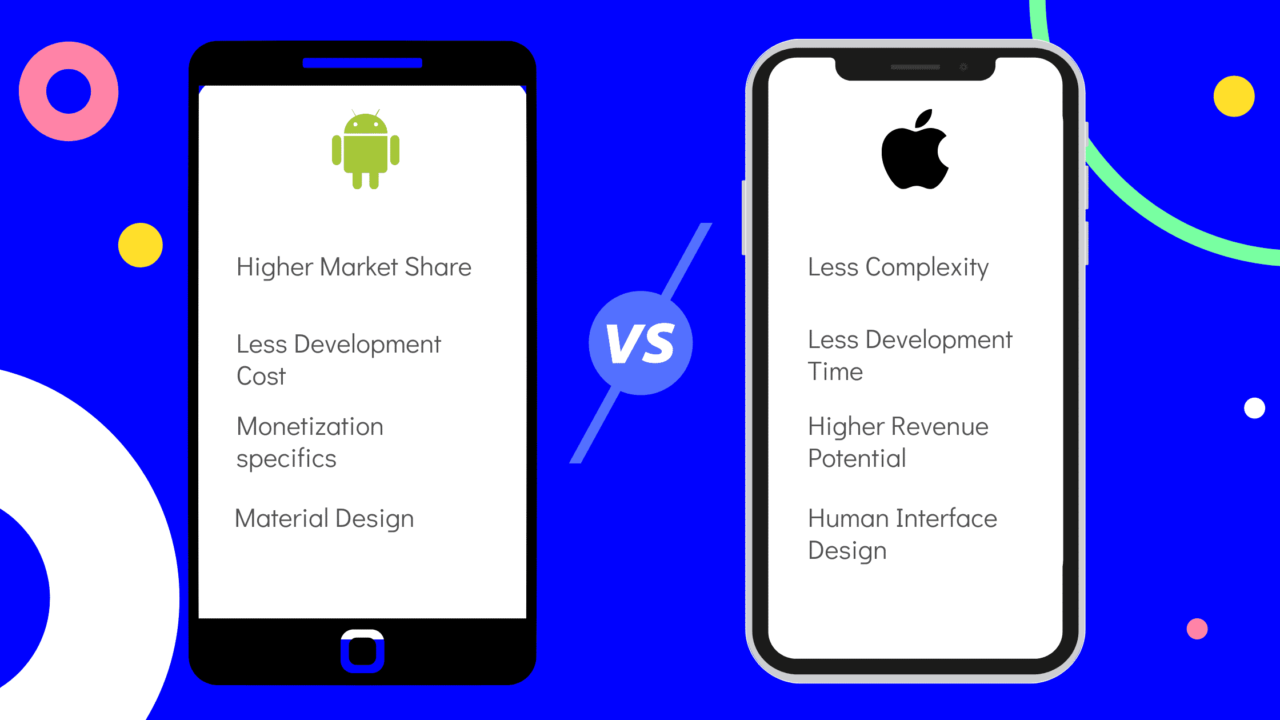 Mobile Apps have become so ubiquitous that it is almost impossible to imagine our lives without fiddling with our smartphones. All credit goes to renowned android and iOS app development companies who built feature-rich, robust mobile apps like WhatsApp, Facebook, Instagram, etc., that have dominated our world like never before.

It’s no exaggeration that this dominance of smartphones and mobile apps has brought unparalleled growth opportunities for a mobile app development company. But for businesses to create an app aligned with their business strategy, choosing between Android and iOS platforms is among the most critical decisions.

According to Statista, there are currently around 3.5 billion smartphone users in the world. Further, if we compare Android vs iOS global market share, Android stands strong with 72.2% market share, and iOS: has 26.99% market share.

Developing Android and iOS applications may seem similar to an untrained eye, but the fact is that each of these two has its intricacies. A question always remains about choosing the most suitable OS. This article will delve into differentiating the two types of apps – Android and iOS. That will be from the perspective of businesses, i.e. the app owners, and the developers, i.e. the app creators.

For any business owner, investing in building technology is brainstorming. No business owner blindly follows tech trends without evaluating the repercussions of the investment and results.

Their evaluation primarily focuses on market research, investment of time, app development cost, and the end profit. So, without further ado, let’s look at the difference between Android & iOS based on the parameters of a business owner:

For any successful application, the buyer’s persona is the first thing that needs consideration. If we compare both, the primary aspect is that iOS users are brand loyal, and Android users are conscious. Android users usually look forward to a good price/quality ratio.

Another aspect of determining the target audience is the demographics. For example, iOS mobile app development is more rewarding in the US, Canada, Australia, and a few other countries. This is due to their preferences. When it comes to Android application development, citizens of Asia, South America, Central, and Eastern Europe are the major clans that use Android.

However, considering the more significant market share of Android, if a business is planning to target a global audience, Android application development might be a suitable option.

Another essential aspect of determining the most suitable OS is the time and cost required to develop a mobile application. In general, iOS and Android apps take a similar amount of time to create. But, because of the different screen sizes and resolutions of Android devices, android application development can take up to 20% longer than iOS mobile app development.

And as far as cost is concerned to publish an app on Android Play Store, costs $25 for one-time, while on the Apple App Store, it needs a fee of $99 annually.

Now to choose between the two, it’s essential to consider both timelines and the app development cost.

If we talk about timeline, Android might take a more significant share of time to be developed. Still, it’s beneficial on the financial side and takes comparatively less time to get published. In contrast, for iOS, the development might not take much time, but the publishing timeframe and the cost can be deciding factors.

The way Android and iOS apps generate revenue majorly differs from each other. While all Android apps are free to download, their monetary income is collected through in-app purchases and ads placed inside applications. While for iOS, the creators of apps usually charge for downloading their apps.

To decide on whether to choose Android or iOS on revenue grounds, both can be profitable as there are numerous ways to pull in revenue right from ads, affiliate sales, sponsorships, or subscriptions.

Now that we have an idea of Android vs iOS from a business perspective let’s look at developers’ opinions on Android or iOS application development.

Understanding the technical aspects of the application is an integral part of the process. It allows the prediction of possible issues & helps in making beneficial tech decisions moving forward. With that said, here are the specific points between Android application development & iPhone app development:

The primary difference between iOS and Android in-app development is the development tools and languages used.

As for development tools, earlier, all the android apps were developed on Eclipse. But with the launch of Google’s Android Studio, the support for Eclipse ended. Android studio became the go-to environment for the android application development.  Whereas for iOS apps, XCode is used.

Further, for app programming languages, For Android programming, developers use Java, Kotlin, and C++. and iOS developers have two languages to choose from Objective-C and Swift.

The complexity of development

Indeed this is a bit subjective, as many things factor into the complexity of building an app. In general, app development consists of three stages – design, development, and testing.

When it comes to the development of Android, considering a large number of devices, each with its screen size and aspect ratio, it’s comparatively more complex than iOS. Meanwhile, iOS applications are intended to work on a set of devices. Thus, iOS app development is much easier.

Android apps and iOS apps both have different approaches to UI/UX design. Each OS has its design style, influenced by the two big companies that created them. Google’s Android app design guidelines are Material Design, which caters to the hardware part more than focusing on aesthetics.

We call Apple’s iOS app design guidelines as Human Interface Design. It focuses on clean and intuitive design, providing users with a superior user experience. However, both apps follow minimalistic & concise design concepts that let the user enjoy an app with a visually appealing interface.

With all of that read and learned, it can be concluded that there are apparent differences between the two OS – Android & iOS. To choose between the two, one needs to analyze every aspect discussed above. Then opt for the model that best fits your resources and plans. However, partnering with an acclaimed mobile app development company can be the best choice to make when planning to develop a successful app.